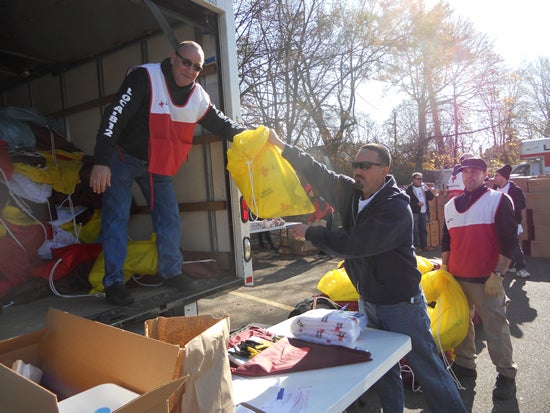 News of the impending storm built for days.

In late October, as the nation devoured news of the presidential election, dark clouds were gathering over New York and New Jersey. News of an impending storm, dubbed Hurricane Sandy, built for days.

On October 29, the hurricane hit and battered America’s East Coast. News of injuries, deaths and devastation started trickling out that night, but by the next morning, it was clear: Hurricane Sandy was a bad one.

Like they do when disaster hits anywhere, Teamsters sprang into action. This time, the union’s close partnership with the Red Cross made a huge difference for those hit by the storm. The Teamsters also used social media like Twitter and Facebook to alert Teamsters nationwide of the need for help.

“Teamsters care. It’s in our DNA,” said Jim Hoffa, Teamsters General President. “Our union has been integral in disaster recovery areas for decades, but the response to Hurricane Sandy by both public service Teamsters and rank-and-file members who just want to help out, has been amazing.” 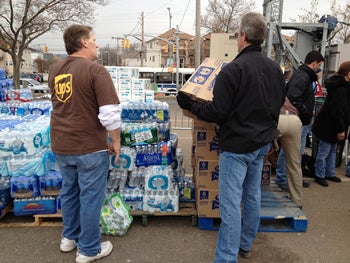 Well before the Teamsters Union called on its members to do all they could to help victims of the Category 1 hurricane, members were helping out. Many of those helping were from stricken areas of New York and New Jersey and they did so at a personal sacrifice while struggling with their own losses.

Teamsters from every Joint Council, dozens of local unions, and all over the country, helped in any way they could. Here’s a small sample of what Teamsters did in the aftermath of Hurricane Sandy:

On the union’s Facebook and Twitter pages, Teamster.org and the Teamster Nation blog, the union called on members to do all they could for those suffering. Through social media, the union recruited volunteers to donate money and essential items, load and deliver trucks, man warehouses and countless other things.

The Teamster Nation blog spotlighted many areas where Teamsters could help, and reported on a few members who heeded the call. Here’s one such story from the blog: “Sister Mary Donch was in a diner near Floyd Field this morning and saw our Facebook post asking for help distributing Red Cross supplies for Sandy victims. Mary posted a comment asking where it is. We posted a map and Mary’s there now! She’s a locomotive engineer for Metro-North, Division 269, and a 19-year BLET member.”

Some Teamsters posted “How can I help?” on the union’s Facebook page and were given information on where to go or who to call. Those who lived too far away to volunteer made donations to the Teamsters Disaster Relief Fund and to the Red Cross.

“We reached out directly to our local union officials and employers and put together a strategy to get the hardest hit locations supplies without going through red tape,” said George Miranda, International Vice President and President of New York’s Joint Council 16. “We also implemented a social media program that made a real difference. We posted the need for volunteers on the Teamsters Facebook page and, within minutes, have enough volunteers to get the job done.”

Miranda himself was instrumental in organizing relief for those affected by the storm. He and Al Rispoli, President of New Jersey’s Joint Council 73, led hundreds of Teamster volunteers to help out in all corners of the region at the Red Cross Jersey City warehouse. The massive volunteer operation that Miranda spearheaded included more than 20 local unions from the area, hundreds of trucks packed and staged and countless other activities.

“This was the most massive member-based effort that our Joint Council ever led,” Miranda said. “Our New York and New Jersey members really came through for our communities.”

Local 817 called the Joint Council right away to volunteer their rig and drivers. Elected officials and non-profit organizations had a tough time finding trucks to transport goods, and the Teamsters were able to make it happen because of Local 817. And despite the restrictions placed to cross bridges, Local 817 members ensured that they were let through to make deliveries.

“The police wouldn’t let the truck over the Verrazano Bridge,” said Thomas O’Donnell, President of Teamsters Local 817, “Then our driver showed them the paperwork enlisting the Joint Council to help with disaster services and we were let right through.”

In New Jersey, a group of warehouse Teamsters with Local 641 stepped up to confront the challenge, according to Anthony Artificio Jr., the local’s Secretary-Treasurer. Three days after the storm, a meeting was held in the Fed-Way warehouse in South Kearny, N.J. Company management spoke about the plan to remediate the badly damaged warehouse and how they needed the Teamster drivers to put aside their duties and help in the clean-up effort.

“I was proud of what the Teamsters did,” Artificio said. “The company had a plan that was to take five to six weeks.” Within 15 days, he said, the warehouse was cleaned up and the Teamster drivers were already back out making deliveries. “This is just another story of Teamsters helping our brothers and sisters for a common cause.”

While Teamsters have much to be proud of in their response to the aftermath of Hurricane Sandy, the storm caused tragedies for many Teamsters and their families.

At press time, 253 people were left dead by the storm, and some of them were Teamsters or their family members.

Local 272 Teamsters are mourning the death of Anthony Narh, a Teamster parking attendant at Empire Parking in Manhattan. During the storm on October 29, Narh, a Ghanaian immigrant and father of three, was trapped in an underground garage. When water flooded the garage, Narh drowned.

Bobby McDuffie, a Local 863 Teamster, also perished in the storm. McDuffie, also a father of three, died while at work in a New Jersey warehouse. He went to move his car away from the rising waters of the Passaic River and he drowned in his car.

One of the most heart-wrenching stories to come out of the hurricane also affected a Teamster family. Two young brothers drowned and were found dead shortly thereafter. The boys—2-year-old Brandon and 4-year-old Connor—were the sons of Local 831 Teamster Damian Moore and his wife Glenda. Glenda, with the children in tow, tried to escape her SUV after it stalled in the deluge on Staten Island. Trying to make their way to safety, the boys were swept from their mother’s arms into the violent, rushing water.

The Teamsters Union’s partnership with the Red Cross made the difference for thousands of the hurricane’s victims. Teamsters on the ground became the agency’s eyes and ears to direct resources to those who were in need. A public official called Joint Council 16 soon after Hurricane Sandy to request bottled water. The neighborhood was without power or heat, so people were cold and wanted a hot meal. Safe drinking water was a problem.

Local 812 made sure that Long Beach residents received pallets of water. One official pointed Teamsters to the Martin Luther King Recreation Center. The center was doing what it could, but resources were limited. The first time the Teamsters came, they brought water. The next time they came, they brought cleaning supplies, water and fresh produce.

When Local 202 heard that the MLK Center had kitchen facilities they arranged for a truck of fresh produce from the Hunts Point Market to help feed the community. And when milk was requested, Local 584 called upon Elmhurst Dairy to ensure that kids were able to drink fresh milk for the first time in days. Local 808 and 210 delivered cleaning supplies and 802 send baked goods.

Meanwhile, the American Red Cross began supporting the center with twice-daily delivery of meals and clean up equipment. Roy Gillespie is a Teamsters human rights commissioner and member of Joint Council 13. He has been working long hours in D.C. at the Red Cross/FEMA Disaster Center. Gillespie has coordinated the relief effort alongside the Army, the Red Cross and other agencies. He’s the union’s man on the ground when disasters strike, and with each new disaster, he gets better at his job.

“When somebody needs something the Teamsters can do, we make it happen,” Gillespie said. “Every time Teamsters get involved, others realize what we’re capable of.”

Gillespie has worked closely with Chris Jordan, Director of Field Logistics and Technology and Disaster Services at the Red Cross. “The Teamsters have been invaluable,” he said. “It’s a great partnership. Teamsters offer logistical support, labor and equipment. The work the Red Cross does is 93-percent volunteer, so help from Roy (Gillespie) and the Teamsters has been critical.”

On November 17-18, the Teamsters and Red Cross worked together on a massive push to get bulk supplies into the hands of people. More than 150 trucks went from the Red Cross warehouse to each staging site. Then the drivers went through neighborhoods, going door-to-door to bring goods directly to people in the hardest-hit areas.

While Teamster leaders and rank-and-file members were volunteering and coordinating logistics, some Teamsters were cleaning up hurricane-stricken areas as part of their job—and earning recognition in the process.

Those Teamster sanitation workers cleared more than 300,000 tons of debris from neighborhoods after the storm. The Staten Island Advance newspaper reported, “The Sanitation workers arrive like heroes in Staten Island’s devastation zone…New York City’s Strongest are showing up in force—with bulldozers, dumpsters, and hundreds of workers on duty at a time, clad in gloves and dust masks, doing the back-breaking work of cleaning up, neighborhood by neighborhood, in the hardest-hit zones.”

It wasn’t just the sanitation Teamsters who worked through the hurricane and the recovery. As the storm pounded the region, hospital workers belonging to Local 237 and emergency personnel from Local 707 evacuated patients from New York hospitals.

Local 237 Teamsters tackled the massive challenge of cleaning and repairing public housing while protecting properties from looting. Teamsters from Local 854 drove buses hired by the Teamsters to pick up and drop off volunteers.

UPS Teamsters continued to deliver packages and also spent weekends delivering supplies to devastated areas of Staten Island, Manhattan and Rockaway. When supplies were flown in, UPS Teamsters were there to load and warehouse them before other Teamsters delivered the supplies to where they were most needed.