This August, 110 years will have passed since a joint convention of the Team Drivers’ International Union and the Teamsters’ National Union was held in Niagara Falls, N.Y. At that convention in 1903, history was made for a number of reasons. That year, these two groups united and the International Brotherhood of Teamsters was formed. The leaders of the new union practiced “pragmatic cooperation,” a term coined by David Witwer, professor of American studies and history at Penn State, in his book “Race Relations in the Early Teamsters Union.” The problem of racism presented challenges to the union in its attempts to grow and expand given the realities of racial conflict in America. Some regions of the country were suffering from serious conflict and many Teamster leaders understood that these clashes must be overcome in order to beat back employer tactics of division and ensure survival of the union.

Between August 3 and 13, delegates from the two organizations, including T.A. Stowers, a black delegate from Local 10 of the National Teamsters Union in Chicago, discussed the future of the proposed new union and how it would be structured. Stowers stood up to argue for protection of black Teamsters through language in the Teamster constitution. He introduced Resolution XXIX which stated that “no member of the International Brotherhood of Team Drivers shall discriminate against a fellow worker on account of color or race.” This was based on language in the original Team Drivers International Union constitution. His intention was to maintain the same level of legal protection in the newly formed union through written language.

When the idea of specific language met with resistance during these discussions, he felt that job class combinations could be used as an alternative incentive for black and white Teamsters to work closer together:

“I don’t think there ought to be anything in the Constitution that discriminates against the black man. If the question of color is not mentioned at all, but provision is made for two locals of the same class to come together, it will settle the matter,” Stowers said.

It is not only rare but significant that there was at least a working alliance between black and white members of the Teamsters Union in most parts of the country. It is equally extraordinary that a person of color would be in a position of stature at that time and that he was allowed to speak freely in the meetings.

To put things into context, in 1903 W.E.B. Du Bois released his master work, “The Souls of Black Folk,” declaring the biggest problem of the times to be the color line. Du Bois’ classic “helped to create the intellectual argument for the black freedom struggle in the twentieth century” according to renowned professor, Manning Marable. It was within this atmosphere that Stowers honed his views on black union participation with razor focus.

Also that year, Jack Johnson beat "Denver" Ed Martin over 20 rounds for the World Colored Heavyweight Championship. Johnson was known as the “most famous and notorious African-American on earth” because of the fear and riots that erupted when he beat white opponents. Perhaps the most telling identifier of the racial climate that year is the disturbing fact that 85 black Americans were lynched in 1903, a clear sign that Jim Crow was still legal institution all across America.

During these unlikeliest of times, Stowers stood against the school of thought that claimed black workers didn’t need protection from negative racial attitudes. He was steadfast in his advocacy for his fellow black Teamsters and their need for that protection and their recognition as fellow members. Delegates like George Innis, General Secretary-Treasurer of the Team Drivers’ International Union, and Cornelius Shea, who would eventually become President of the newly formed IBT, were more focused on protecting the autonomy of local unions and preserving the delicately worded Teamster Constitution in a way that would not cause rifts in the new organization. Shea pointed to the already integrated nature of some locals as a reason to avoid specific language that singled out blacks: “In the section of the country I come from, it makes no difference what the color of a man’s skin is. We seat him in the local and he is a member as long as he pays his dues.” Shea said.

Delegates like Mr. W. J. N. Saunders recognized the value of black Teamsters but were skeptical that the Jim Crow south would allow for the integration of locals: “I agree with delegate Young (Albert Young, President of Teamsters National Union) in what he says about the color question, as the old saying is, ‘Color is only skin deep.’ However, in the Southern states it will be impossible to get two classes in the same locals. The moment you attempt to do that, you will find the white people throughout the South will prevent you from going any further with your organizer. I think it is best to try and form locals of the colored men in the South. You might get men of their own color to organize them,” he said.

Though there were colored-only locals in the South, such as Local 270, titled Colored Transfer and Moving Drivers and Helpers, segregation was not the rule by which the union operated. From this point forward progress was slow but steady on the race question. In 1906, the Teamster magazine took a stand against local segregated unions and pronounced there would be “no color line” in the Teamsters union. As with any law, it takes time for reality to catch up to legal intention, so in 1908 the General Executive Board of the union was still granting separate charters because in some cases, black members preferred separate locals because of the autonomy and control it provided along with the fact that they still received the same wages and rights as their white counterparts. Years later, in 1914, George Denny of the St. Louis Teamsters Joint Council, would articulate the pragmatism of the union in a letter he wrote to the Teamster magazine: “It is against the interest of the white drivers to have a body of any kind of men who work at a cheaper rate than the union knows to be fair,” he said.

By 1916 the Teamsters Union had won equal pay for black women laundry employees working with their white counterparts on the same job and by 1919 the union took it a step further using “Equal Pay for All” as their new motto. Some areas were showing their own progress, like when Locals 606 and 608 of St. Louis merged in 1923 to form an integrated local.

While the 1903 convention did not produce specific language that protected blacks from discrimination, the Teamsters union remained one of the only labor organizations of the time that had a constitution which did not include discriminatory language excluding black members. This is partially due to the efforts of T.A. Stowers and other early Teamster leaders who saw the changing tide and understood the bigger picture need for a united labor movement. 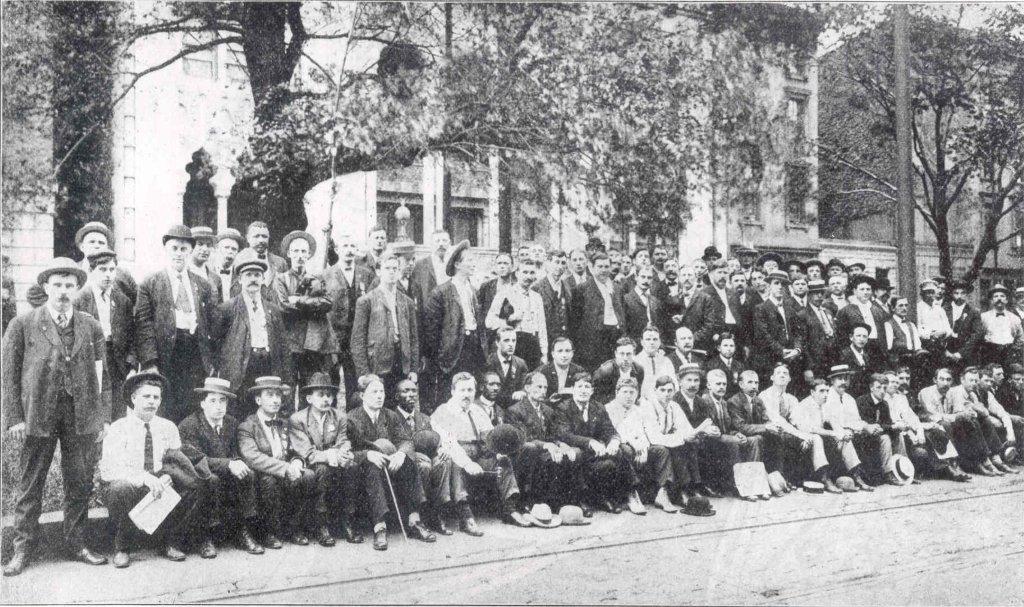 The photo to the right is of the 1905 Convention delegates. They were known as the “Vaseline Club” for the care they took of their horses by rubbing Vaseline on the horse’s necks to prevent chaffing from the heavy collars. Pictured in the front row 7th from the left is Cornelius Shea. It is believed that T.A. Stowers is one of the black delegates sitting on either side of Shea but it is not confirmed.

If you have pictures, stories or other information about family or community members who were black Teamsters from the past and would like to assist in growing our collection, please contact the Karin Jones or Larry Williams Jr. with the Teamsters History Project in the Training and Development Department, 202 624-8117.