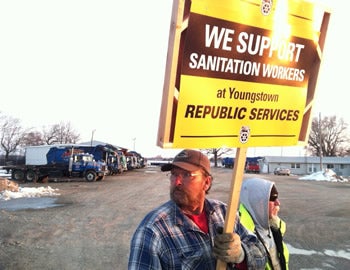 The striking workers are members of Teamsters Local Union 377. They are exercising their rights under federal law to strike in protest of Republic illegally changing working conditions without bargaining and the company’s continued refusal to provide pertinent information related to bargaining.

Sanitation workers at other Republic locations have subsequently refused to work in a show of support of their striking colleagues. Sanitation drivers in Youngstown are honoring the picket lines of their striking co-workers at the landfill. In addition, workers at Republic/Allied Waste in Evansville, Ind. and Urbana, Ill. refused to work today in support of the striking employees at Republic’s landfill.

The sanitation workers who are refusing to work in Evansville and Urbana are members of Teamsters Local Unions 215 and 26, respectively. These workers have the right under federal labor law to refuse to cross picket lines or to refuse to work in support of striking workers at other Republic/Allied Waste locations.

“For more than a year now, Republic has been trying to squeeze every last cent out of their workers by cheating them out of pay, ignoring health and safety protections, raising their health care costs, and cutting their retirement benefits,” said Ken Hall, Teamsters General Secretary-Treasurer.

“Sanitation work is the fourth most dangerous job in the country, yet Republic has been bullying these workers by locking them out of their jobs without pay, withholding paychecks, and demanding contract concessions – even though it makes hundreds of millions in profits each year,” Hall said. “This company thinks these workers aren’t strong enough to fight back, but they’re wrong.”

Republic’s strategy of disrespecting and endangering workers also extends to the communities in which it operates. During the past year, Republic/Allied Waste has forced multiple lockouts and strikes, disrupting trash collection and putting communities at risk across America in an effort to maximize profits for shareholders such as Bill Gates.

In May 2012 in Evansville, Republic Services intentionally left the city without reliable trash service for six weeks, locking out its workers without pay just to teach them a lesson. Out-of-town replacement drivers damaged people’s homes, vehicles and even power lines during the lockout. The Indiana workers took their picket lines to other cities across the U.S. Fellow Republic/Allied Waste workers refused to cross picket lines in five other cities.

“Sanitation workers put their lives on the line every day to protect the public health. They deserve to be treated with dignity and respect,” said Robert Morales, Director of the Teamsters Solid Waste, Recycling and Related Industries Division. “Communities should also be aware of what Republic is doing to put their residents’ health at risk. And it’s not just trash service disruptions. Republic’s record of endangering the public is getting worse – just ask Missouri and Ohio.”

In Bridgeton, Mo., an ongoing fire at Republic’s landfill is of increasing concern. The fire is next to buried radioactive nuclear wastes. The EPA’s anti-terrorism plane has detected radiation in the air, and noxious fumes are making residents sick. The Missouri Attorney General has just announced a lawsuit against Republic in order to force it to correct its environmental violations and to provide remedies to help local residents and businesses deal with the ongoing effects of the burning waste. The lawsuit also seeks to order Republic to pay for ongoing environmental testing for compounds such as dioxins, hydrogen cyanide and sulfur dioxide.

In Youngstown, a planned natural gas fracking project on the site of Republic’s landfill has residents concerned about air pollution that will be generated from the industrial process of oil and gas production. In Stark County, Ohio, odors and other environmental violations stemming from underground fires at Republic’s Countywide landfill led to a $10 million fine from the EPA and an 800-plaintiff lawsuit against Republic that was just settled in March 2013.

Republic/Allied Waste’s total revenues were more than $8.2 billion in 2011, with profits of more than $589 million. In May 2012, the same month it locked out its workers in Evansville, the company approved a death and disability benefit for its CEO valued at more than $23 million. Bill Gates is the primary shareholder of Republic stock. Gates owns approximately $2.4 billion worth of stock, or 25 percent of the total worth of the company. Michael Larsen, Gates’ investment manager, sits on Republic’s board of directors.