The striking landfill workers are members of Teamsters Local Union 377 in Youngstown. They have been on strike since March 27, 2013. They are exercising their legal right to strike in protest of Republic’s violations of federal labor law that exists to protect workers’ rights. 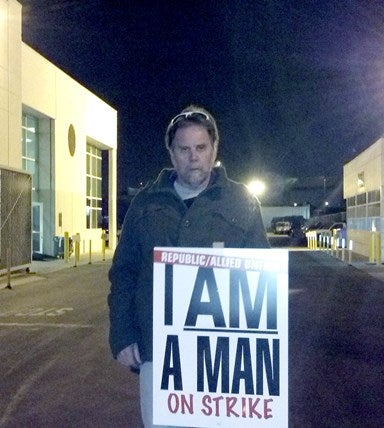 The transfer station workers in Anaheim who are honoring the picket lines of their striking colleagues are members of Teamsters Local Union 952 in Orange, Calif. The drivers and MRF workers are members of Teamsters Local 396 in Covina, Calif. These workers have the legal right to refuse to cross picket lines in support of striking Republic colleagues.

Sanitation workers at other Republic locations across America have also refused to work in a show of support of their striking colleagues. Residential and commercial sanitation drivers who are members of Teamsters Local 377 in Youngstown honored the picket lines of their striking co-workers at the landfill. Workers at Republic/Allied Waste in Evansville, Ind. and Urbana, Ill. – members of Teamster Local Unions 215 and 26, respectively – have also exercised their legal right to refuse to work in support of the striking Youngstown workers.

“Republic is an $8.1 billion company. It should be ashamed of its behavior. It has been bullying its workers by locking them out of their jobs without pay, withholding paychecks, and demanding monetary contract concessions – even though it  makes hundreds of millions in profits each year,” said Ken Hall, Teamsters General Secretary-Treasurer.

During the past year, Republic/Allied Waste has forced multiple lockouts and strikes, disrupting trash collection for hundreds of thousands of people across the United States and putting communities at risk. Republic earned profits of more than $572 million in 2012, and its primary shareholder, Bill Gates, saw his net assets increase by $7 billion last year.

“Sanitation workers put their lives on the line every day as they work the fourth most dangerous job in the country,” said Robert Morales, Director of the Teamsters Solid Waste, Recycling and Related Industries Division. “Their work protecting the public health is vital, and they deserve to be treated with dignity and respect.”

Republic/Allied Waste’s total revenues were more than $8.1 billion in 2012, with profits of more than $572 million. Bill Gates is the primary shareholder of Republic stock. Gates owns approximately $2.4 billion worth of stock, or 25 percent of the total worth of the company. Michael Larsen, Gates’ investment manager, sits on Republic’s board of directors.