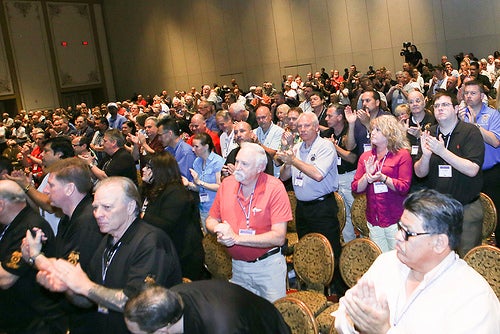 The war on workers and what the Teamsters Union is doing to fight back took center stage today at the 2013 Unity Conference, and the attendees were uplifted by powerful speeches by leaders, members and soon-to-be members. View more photos.

“Our union is in great financial shape and I’m proud of that,” he said.

Illinois Gov. Pat Quinn, a Democrat and member of Local 786 in Chicago, said his state is surrounded by states with right-to-work-for less laws. However, Illinois is going in the other direction, supporting union members’ rights to collectively bargain while investing $44 billion in infrastructure. That work is being done through project-labor agreements that put union members to work, with Illinois leading the nation in the number of agreements.

Quinn said he is working closely with the Teamsters to make sure the union’s workers play an integral role in the public works projects.

Durazo, the daughter of immigrant farm workers, praised organized labor, including the Teamsters, for fighting to pass effective reform.

“These are momentous times,” she said. “Now is the time to pass immigration reform.”

The attendees were then lifted by speeches from workers from the school bus campaign and other campaigns, including the California waste campaign, the port drivers, Seattle airport and taxis, Boston parking and the American Airlines and US Airways mechanics’ organizing campaigns.

Since the Teamsters’ Drive Up Standards campaign began in 2006, more than 35,000 school bus and transit workers have joined the Teamsters, building Teamster power across North America.

Roberto Rodriguez, a driver with Illinois Central and a member of Local 777 in Lyons, IL, told the crowd that he and his co-workers sent a message to the company that they would not be treated as second class citizens anymore.

“We are the proof that if you stand together for what is right and just you can change the treatment and respect you receive in your workplaces,” Rodriguez said.

“I have 26 years in the harbor and these last years are the best because I am a Teamster,” said Eduardo Uribe, a port truck driver with Toll Group and a member of Local 848 in Covina, California.

He and his co-workers recently ratified a historic Teamster contract, setting high standards, including wage increases, affordable health insurance and a secure retirement.

Salah Mohamed, a taxicab driver in Seattle, said since the drivers formed an association with Local 117 in Seattle, conditions have improved drastically.

“Only Teamsters can do that,” he said. “I thank each one of you. We’re family. Let’s help each other.

Harris talked about her fight to win more money for California homeowners who faced foreclosure in the housing crisis. Because she rejected an earlier deal, the amount of money Harris eventually won for her state’s homeowners jumped from $2-$4 billion to $20 billion.

“It was won because of the partnership with you,” Harris said, noting that Teamsters held rallies and educated residents about the settlement.

She said her fight is similar to the battles Teamster leaders wage every day to improve the lives of members.

“We are fighters, we know we have to fight,” Harris said.