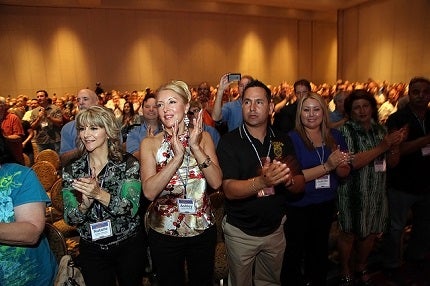 The 2013 Teamsters Unity Conference convened Sunday, May 12, welcoming thousands of Teamsters from the U.S., Canada and Puerto Rico to Las Vegas. The 12th annual conference has brought together Teamster principal officers, business agents, organizers and rank-and-file members to share their accomplishments, their challenges and the work they are doing to advance the lives of workers. View more photos.

“Teamsters are the best when we’re together, and you feel it right here in this room,” said Jim Hoffa, Teamsters General President, addressing the crowd.

This was a special Unity Conference for Hoffa, as it celebrated the 100th anniversary of his father, James R. Hoffa’s, birthday.

“I’m very proud to say that we’ve raised $2.5 million this year, because of you, the locals and Joint Councils, and we’re going to give away more than $800,000 in scholarships to send Teamster kids to college. That’s what it’s about, the next generation,” Hoffa said, referencing the James R. Hoffa Memorial Scholarship Fund.

“We’re going to continue to grow, and it’s so important that all Teamsters get active and get involved,” Hoffa said.

While the union continues to grow, workers have faced unprecedented attacks from corporate-backed politicians and wealthy anti-worker interests over the past several years.

“We need to redouble our efforts in the face of the fact that we know corporate America is taking us on every day. We know corporations engage on a daily basis in coordinating bargaining against us, so we need to do coordinated bargaining,” Hall said.

The General Executive Board was present for the day’s events, with International Vice Presidents Rome Aloise and Steve Vairma echoing Hall’s comments about coordinated bargaining in their presentations.

Over the next several days, Unity Conference attendees will have the opportunity to participate in breakout sessions and meetings concerning a number of employers and on the topics of contract negotiations and organizing, where they will further develop skills critical for representing the membership.

D. Taylor, President of Unite HERE and Joe Hansen, President of the United Food and Commercial Workers (UFCW), both expressed the essence of the Unity Conference—their solidarity with Teamsters as part of the broader labor movement.

“You are a great union. Your union has a special place for working people in this country.  We are very honored to be your partner, to work with you and go forward together with you,” Taylor said.

“Wherever injustice exists, labor needs to be there,” Hansen said. “There is no stronger champion in today’s labor movement than Jim Hoffa and I am happy to be his partner.”

Bill Press, host of the Bill Press Show, saluted the Teamster audience for a proud history and strong leadership.

“When I look at this audience, I see the real strength of the union—a broad, diverse, strong membership of Teamsters across North America. You continue to organize workers—bakery workers, school bus drivers, airline mechanics and police officers. You represent America; you are what America is all about,” said Press, a 30-plus-year union member.

Press talked about the various interests, including the Koch brothers and the American Legislative Exchange Council (ALEC) that are coordinating to strip workers of their rights and decimate the middle class.

“This Unity Conference reminds us of the tough work ahead and unites us in securing a fair deal for every working man and woman in America. If you continue to carry the fight on the front lines, I will carry that on the air, on the radio and television. We will carry on that fight together on behalf of nonunion and union Americans, and with history and morality on our side, we will prevail.”

The 2013 Unity Conference continues Monday with a number of speakers, including Illinois Governor Pat Quinn.