Jeff Fry recently rallied outside the Sunsweet Growers facility in Yuba City, Calif., along with hundreds of his co-workers in a powerful showing of unity. They held an action outside the world’s largest dried fruit processing plant, chanting for hours, carrying signs that said, “Together we are stronger” and “Teamster power.”

“We want a fair and equitable contract. That’s all we want,” said Fry, a nine-year juice operator and Teamsters Local 601 shop steward.

Teamsters Local 601 in Stockton, Calif., represents 500 cannery, food processing and warehouse workers at Sunsweet’s Yuba City plant. These workers are currently working under an extension of a previous three-year contract. The workers have overwhelmingly rejected two contract proposals and their last negotiation session with the company was in April. 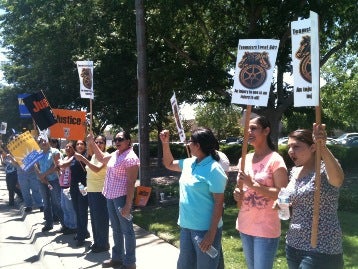 “We needed this day of action to show that we are standing together. We want the company to go back to the table and get serious about a fair contract,” Fry said.

“What we are doing with the day of action is sending a message to the company that the people are together, they are strong and we are not going to back down until we achieve a fair labor agreement for our members. Our members are determined to do that and we are determined to support them,” said Ashley Alvarado, Secretary-Treasurer of Local 601.

“These workers are tough, they are resilient and they have the full support of Teamsters Joint Council 7 and the local unions in their fight for a fair contract,” said Rome Aloise, International Vice President and President of Joint Council 7.

Sunsweet Teamsters have powerful backing. While Teamsters Local 601 has 7,000 members, there are 15,000 members in the Teamsters Cannery Council, which includes Local 601, Local 948 in Visalia and Local 890 in Salinas.

“It’s great to see other locals come to support our members. We are grateful to General President Hoffa and Joint Council 7 President Rome Aloise for giving us all the support we need,” Alvarado said.

Fry said the rally opened his co-workers’ eyes to the powerful backing from brothers and sisters who do not even work in the Sunsweet plant. He believes the day of action serves an important message to the company that it’s time to truly work together.

“We are not going to go silently into the night and take whatever bone Sunsweet throws at us,” Fry said. “We care about Sunsweet and that they are a profitable company. We just want something we can live with and to provide for our families. We know they can do better by us.”