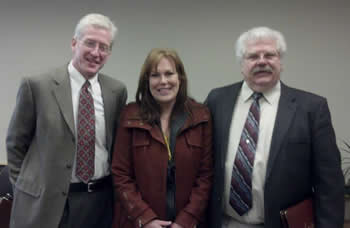 “I was fired by the county, but thanks to the great representation from Local 690, I was reinstated in my job as a Spokane County Public Defender,” said Carol Huneke. “Seven years ago we needed representation and turned to local 690 to help to organize. I was the first person to join and now, due to the diligence of the Teamsters, I was reinstated to my job and can continue doing the work I love.”

Huneke works as a public defender representing people who are accused of a crime and cannot afford an attorney.  She enjoys the work, puts in long hours defending her clients and considers it a privilege to serve the community.

“The county denied our wrongful termination grievance so the Local immediately filed for arbitration with the county and the Local’s legal team went to work preparing this very complicated case for arbitration,” said Val Holstrom, Secretary-Treasurer of Teamsters Local 690. “The process took 14 months and Carol’s arbitration lasted seven days but we were up to the challenge. We fought for Carol and won. The arbitrator ordered the county to reinstated her with no loss of seniority and make her whole for all lost wages and benefits.”

Due to their large jurisdiction, Holstrom and his team make certain their union representatives and staff are trained and have a thorough background in a variety of professions.

“Being a public defender is not just a job, it’s my passion and calling,” Huneke said.  “It’s only because of the great representation from the Teamsters that I got my job back.”