This year marks the 60th anniversary of the dedication of the International Brotherhood of Teamsters headquarters in Washington, D.C. The building is recognized as a landmark in the city, and stands as a testimony to the union’s accomplishments throughout American history. These achievements have been won by millions of members and are represented in the history of the building.

The 1953-1955 issues of The International Teamster, the magazine of the Teamsters Union, chronicled the history of the structure from idea to reality. However, the idea for an office located in Washington began in 1940. Teamsters General President Daniel Tobin purchased a plot of land overlooking the Capitol at the intersection of Louisiana Avenue and D Street N.W. Tobin knew it was a solid location with a great view of the Capitol. He also chose the site because he wanted the union to be able to closely observe the actions of Congress and take an active role in the legislative process surrounding labor issues. Due to World War II and other pressing priorities, the General Executive Board (GEB) postponed construction for over a decade. The first designs were produced in 1950, and General President Dave Beck made revisions to the plans after succeeding Tobin in late 1952.

In June 1952, the GEB approved the move of the headquarters from Indianapolis to Washington, D.C. The move occurred on February 1, 1953, and was supervised by General Secretary-Treasurer John English. The first Teamster office in D.C. was located in the headquarters of the National Association of Letter Carriers on Indiana Avenue, a short distance away from the lot purchased by the Teamsters. Upon making the transition, Beck said: “We are making this change, long planned by the General Executive Board, to bring us in closer touch with the strategic point in national affairs. It is becoming increasingly important for our organization and labor unions generally to be in almost daily liaison with Congress and the executive departments. We believe we can do a more effective job of serving our members through locating our headquarters in Washington, D.C.”

In February, Beck and English signed the contract for the construction project. However, ground could not be broken until an act of Congress was passed. This was required because Teamster headquarters was the first building to be built on a federal-city boundary line in the District of Columbia. This boundary line, bordered by the federally controlled Capitol Plaza, was within Congress’s jurisdiction, because only Congress had control over federal issues in the District.

Sen. Warren Magnuson, a Democrat from Washington state and longtime Teamster supporter, introduced the bill. It passed the Budget Committee, both chambers of Congress and was signed into law by President Dwight Eisenhower.

Once the bill was signed, the Teamsters broke ground on March 16, 1953. The GEB selected the company of Thompson-Starrett of New York as general contractors. The firm of Holabird, Root and Burgee of Chicago was designated as the architects.

The building was constructed entirely by union labor. The trucking of materials to and from the construction site was carried out by Local 639 of Washington, D.C. Many other unions participated in the process. These included the Wood, Wire and Metal Lathers, the Marble Masons, Steamfitters, Tile Setters, Electrical Workers and Carpenters. 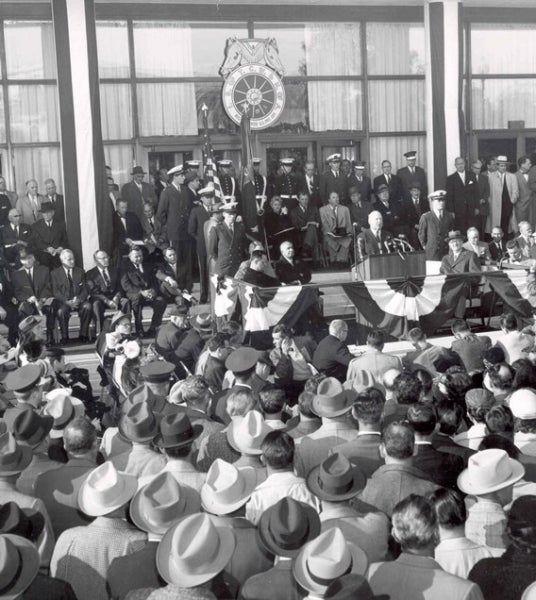 Work on the building advanced rapidly, and construction was completed in June 1955. Occupation of the site began on July 5. The structure was lauded by members and the general public alike.

A formal dedication ceremony was set for November 4, 1955.  Beck closely supervised the planning of the event and created a “Dedication Week” before the ceremony. This included a series of open houses where Teamster members and their spouses could tour the building. Guides included students from The George Washington University.

The official dedication ceremony began with Earl Wrightson, star of the television series “The American Musical Theatre,” singing the American and Canadian national anthems as a Marine Corps color guard raised the American flag. Dr. Earl F. Adams of the National Council of Churches gave the invocation and Beck gave a speech. President Eisenhower sent a telegram that read: “It is fitting that this structure be built in the capital of a free republic which accords to labor and its representatives their equal and rightful place in its social and economic life. Strong, dedicated, democratic trade unionism is one of the bulwarks of our American way of life. Our democracy and our economy both make possible and draw strength from free trade unions.”

There was also a telegram from General President Emeritus Tobin. He congratulated the members on the dedication and stated his great disappointment that illness prevented him from attending. Sadly, Tobin died of pneumonia 10 days later in Indianapolis, and was never to see the completed building that he had envisioned so many years earlier.

After Beck concluded his remarks, American Federation of Labor President George Meany gave the dedicatory address. In his statement, Meany pronounced that the new building had “the forward look that inspires our whole trade union movement today.”

At the completion of his address, Meany joined Beck and English in laying the final cornerstone. A copper box was inserted in the stone, which included an official Teamster roster, a copy of the constitution, a copy of The International Teamster, the dedication brochure and a list of attendees.

Monsignor George Higgins of the National Catholic Welfare Conference then spoke briefly on the economic and social role of labor. The ceremony concluded with a benediction by Dr. Norman Gerstenfeld of the Washington Hebrew Congregation.

Once the ceremony concluded, the participants made their way to the Daughters of the American Revolution Constitution Hall for an all-star variety show. The 3,500 guests were entertained by such Hollywood notables as Walter Pidgeon, George Murphy, Margaret Whiting and Pat O’Brien. This all-night performance marked the end of “Dedication Week.”

The next day, an open house was again held for Teamster members and their families. Well into the night, the visitors enjoyed the stunning views of the Capitol from the new headquarters of the nation’s largest union.

Over the years the union’s headquarters continued to grow and expand. Beginning in the early 1970s, an annex was added to the original structure and was completed in 1974.

The Teamster headquarters has stood proudly across from the Capitol for 60 years, a testament to labor’s importance in the affairs of the country. The building, a physical representation of the union’s spirit, relies on the members who provide the financial support and the hundreds of staff who keep the structure operating to stay strong. The headquarters is a living memorial to Teamsters past, present and future.