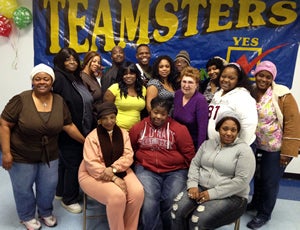 Workers with United Cerebral Palsy (UCP) in Baltimore have voted unanimously, 29-0, to be represented by Teamsters Local 570, also in Baltimore.

The aides decided to join the Teamsters after UCP bus drivers voted 17-1 in favor of joining Local 570 in August. The aides work with adults with cerebral palsy, a group of chronic conditions affecting body movement and muscle coordination.

Jacqueline Lewis was one of the workers who voted in favor of Teamster representation. Lewis, a personal development assistant, helps care for and assists in transporting clients with cerebral palsy, many of whom use wheelchairs.

“I joined the union for equal opportunity, fairness and better conditions for all of us,” Lewis said. “It’s time for a union. It’s time all jobs have unions because we all need a voice.”

“The unanimous vote sends a clear, strong signal from the employees that they really want the union to work on their behalf. They believe they have not been treated with dignity and respect in many areas, and have confidence that Local 570 can best represent them,” said Sean Cedenio, Secretary-Treasurer of Local 570.