America's middle-class majority is dead. And that's not likely to change unless dramatic economic changes are made, a new Pew Research Center report states. 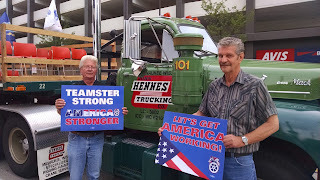 The document shows that those making up the upper- and lower-income households overtook those in the middle in 2015, and Pew said it could be a tipping point for the U.S. demographically away from middle-class workers to the nation's most wealthy.

A summary of the survey tells the story:

And middle-income Americans have fallen further behind financially in the new century. In 2014, the median income of these households was 4% less than in 2000. Moreover, because of the housing market crisis and the Great Recession of 2007-09, their median wealth (assets minus debts) fell by 28% from 2001 to 2013.

This shouldn't be news to readers here. But this Pew study does detail the middle class's precipitous fall. In 1971, 61 percent of households made between two-thirds and double the nation's median income for a family of three. Now, it is just short of half.

Two major reasons for the demise of the middle class can be traced to the drop in unionization as well as lousy trade deals like NAFTA and the teed-up Trans-Pacific Partnership (TPP). As a result, there are fewer skilled labor jobs paying an honest wage that can support a family.

It's all part of the reason the Teamster debuted our "Let's Get America Working" platform back in September -- to push Congress to invest in this country so workers can get paid a good salary and the economy will benefit from the spending that results from increased incomes.

Lawmakers on Capitol Hill took the first step last week when it approved a long-term transportation bill. But they have to follow that up by passing more policies that will help all Americans.