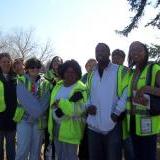 First Student school bus drivers and monitors in Brooklyn Park, Minnesota, have voted overwhelmingly, 102-33, in favor of representation by the Teamsters Union, seeking fair pay, affordable health insurance, respect and a voice in their workplace. The 167 workers are now members of Teamsters Local 638 in Minneapolis, and the first of more than 2,000 First Student workers who have the potential to become Teamsters in Minnesota.

“I knew there had to be a change and we needed to speak up,” said Michael Mendenhall, a three-year driver with First Student in Brooklyn Park. “This was a big team effort and there was a lot of motivation to vote Teamsters.”

Nicola Walker, a fellow driver, was excited upon hearing the strong vote count. Walker, like many of her coworkers, would like to see improvements in pay, as well as fairness in the allocation of assignments.

“We were jumping for joy. It’s a lot like walking on needles at all times here because of the favoritism. We’ll all benefit from the union because we need a voice and respect,” Walker said.

According to Mark Rime, Secretary-Treasurer of Local 638, this is the first group of First Student workers that Local 638 has organized, and hopefully the beginning of more workers deciding to join the union.

“I am overjoyed that they chose Teamster representation, and we are thankful to all of the supporters who helped these workers organize, including the International Union Organizing Department for their tremendous help,” Rime said.

First Student drivers and monitors in Oakdale, Minnesota, will have the opportunity to vote in favor of joining the Teamsters on May 5, while First Student school bus workers in Champlin, Arden Hills and St. Paul are currently working to organize with the Teamsters.

This victory is the latest in an effort to organize private school bus and transit workers across the country. Drive Up Standards is a national campaign to improve safety, service and work standards in the private school bus and transit industry. Since the campaign began in 2006, more than 17,000 drivers, monitors, aides, mechanics and attendants have become Teamsters.