School bus drivers with First Student in Portsmouth, Rhode Island, have voted to join Teamsters Local 251 in East Providence. The drivers came together seeking respect, better wages, affordable health care and a voice on the job. There are 33 workers in the bargaining unit.

“It’s excellent that we finally have a say,” said O’Kay Santos, a First Student driver, about the 20-13 vote for representation. “I think we are going to see a big difference here now.” 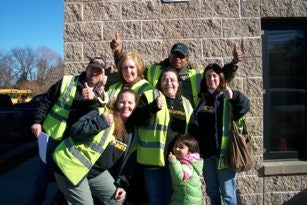 “This is another great victory. It shows that First Student workers are standing up for respect, dignity and better working conditions,” said Joseph Bairos, Secretary-Treasurer of Local 251.

“Everyone in this group came out to vote. The participation was impressive and demonstrates these workers want to see a change. We look forward to representing them and to continuing the momentum of school bus workers organizing with the Teamsters,” said David W. Laughton, Secretary-Treasurer of Teamster Joint Council 10.

The victory is the latest in an effort to organize private school bus and transit workers across the country. Drive Up Standards is a national campaign to improve safety, service and work standards in the private school bus and transit industry.Since the campaign began in 2006, more than 24,600 drivers, monitors, aides, mechanics and attendants have become Teamsters.

For more information on the Drive Up Standards campaign, go to: www.schoolbusworkersunited.org