“We are happy that these dedicated workers chose to be represented by the Teamsters Union,” said Joe Bairos, Secretary-Treasurer of Local 251. “Sanitation work is one of the most dangerous jobs in America, and they deserve the protections of a contract. We look forward to improving their working conditions.” 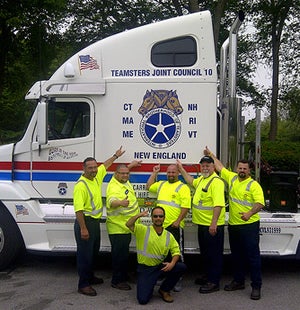 “My co-workers and I work hard and have been serving our communities for years,” said Marco Madeiros, a 20-year front-load driver at Allied/Republic.” Some of us have been here 20, 30 years. We had enough of the bullying and favoritism, so we chose to organize and form a union to negotiate with the company as a group.”

“From the beginning, this was always about respect,” said Manny Alexander, a 10-year residential driver. “Allied/Republic did not respect us and the work we do. Now we can negotiate a contract with the company that will protect our rights and stop the unfair treatment.”

“Standing up to a huge company like Allied/Republic can be scary,” said David W. Laughton, Secretary-Treasurer of Teamsters Joint Council 10 of New England. “Republic has been bullying and harassing workers in Fall River and all across the country. These workers put their bodies in harms way every day to protect the public health. They should be proud of themselves for standing strong and sticking together to fight for their rights.”

Republic Services/Allied Waste is America’s second largest solid waste and recycling company. In 2011, Republic earned $8.2 billion in revenues and declared profits of $589 million, up 15 percent per share from 2010.

The Teamsters represent approximately 9,000 employees at Republic Services and its subsidiaries at more than 150 facilities throughout the U.S., Puerto Rico and Canada.

Founded in 1903, the International Brotherhood of Teamsters represents more than 1.4 million hardworking men and women in the United States, Canada and Puerto Rico. Visit www.teamster.org for more information. Follow us on Twitter @Teamsters.