(Crestwood, Ill.) – The men and women who transport school children for Alpha School Bus in Crestwood, Ill., have voted overwhelmingly to join Teamsters Local 777 in Lyons, Ill., after a hard-fought campaign to win respect, better school bus safety and working conditions at the company. There are 270 drivers and attendants in the bargaining unit.

“I cannot tell you how happy I am. We worked so hard for this for so long, and now we have our union,” said Vanessa Robinson, an attendant. “We need respect, better bus conditions and a better work environment. This is a big step toward achieving all those things.”

“A Teamster contract will give the Alpha drivers and attendants an equal voice and the confidence to speak up without fear of discipline. We need fairness and respect at Alpha and that is why I voted Teamsters,” said Olivia Morris, a driver.

“This is a great victory for these workers, who had the courage and dedication to fight for what is right for such a long time,” said Jim Glimco, President of Local 777. “This is one of the hard-core anti-union, low wage bus companies, and Alpha will now need to come up to the standards that these workers deserve.” 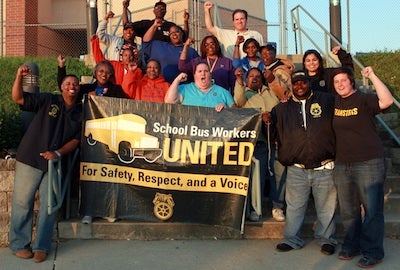 Drivers and attendants at Alpha had been working to organize since 2010. The company resisted the workers’ efforts, setting up a fake “union” called the Executive Committee.

Understanding that they did not have true representation or a legally binding contract, the workers held an internal vote to affiliate with Local 777 in April 2011. The vote resulted in an 8-1 margin in favor of affiliating with Local 777, yet the company did not respect the workers’ decision and refused to recognize Local 777 as their bargaining unit.

The workers remained determined to have a real union, reorganizing and filing for a National Labor Relations Board election in June 2012.

“This vote stands as a testament to the power of workers to unite and better their lives. I am proud of the work of Local 777, Joint Council 25 and the International Union, coming together to help these workers drive up standards in their workplace,” said John T. Coli, International Vice President and President of Joint Council 25. “Our next step is to negotiate a contract that values these hardworking members.”

The Alpha workers had widespread support as they worked together to form their union with the Teamsters. Their support network included the Teamster leaders and school bus members locally and nationally; Cook Action Network (CAN); ARISE Chicago and Chicagoland clergy; and Michael Hastings, Board of Education member, High School District 230 and candidate for Illinois State Senate (District 19).

Cook-Illinois workers have formed the Cook Action Network (CAN) and engaged in a long-term campaign to bring workers’ rights and school bus safety to this company. A recent CAN report outlines the various safety and workers’ rights issues at the company.

For more information on the Drive Up Standards campaign, go to www.driveupstandards.org.

Founded in 1903, the Teamsters Union represents 1.4 million hardworking men and women throughout the United States, Canada and Puerto Rico. Visit www.teamster.org for more information. Follow us on Twitter @TeamsterPower and “like” us on Facebook at www.facebook.com/teamsters.