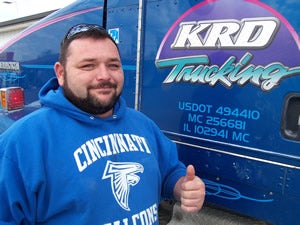 Workers at KRD Trucking approached Local 100 in July after their concerns were ignored by management. Driver Nash Poindexter felt that no matter how hard they tried, the company was unwilling to discuss issues like fair pay, consistent work hours and safety on the job.

“The company would make up our hours on the fly and you’d never know when you would be working or what you could anticipate being paid,” Poindexter said. “It makes it so difficult to plan for the future.”

Poindexter, who is on the negotiating committee, said that it only took a month and a half to get his fellow workers to sign cards and move forward with a vote. On Oct. 17, the unit sent KRD Trucking a clear message, voting 16-8 to join Local 100. The 28 workers are now looking forward to working with their business agent, Dave Hibbard, and Local 100 President Butch Lewis to secure a first contract.

Last year, school bus driver Linda Swartz knew that joining the Teamsters was the only way she and the other 57 drivers, aides and mechanics at Petermann Bus Co. were going to win respect on the job. She led the charge to unionize in 2011, but the vote fell short by a single vote after the company promised to make changes at the 11th hour.

However, a year later little had changed at the company and Swartz was convinced it never would unless she and her co-workers took action.

“I felt like after the first vote the company didn’t follow through on their promises to make things better,” Swartz said. “As soon as the time passed, we decided that it was time for a union—and everyone agreed this time around. We decided enough was enough.”

When the vote was held this time on October 25, there was little doubt about the result as the group overwhelmingly voted 39-16 to join Local 100. Swartz felt that their choice was clear.

“I think the Teamsters are our best partners because of their experience in the industry and when they tell us something, I know it’s the truth,” Swartz said. “We have a good relationship founded on trust. I’m glad we have the union, they are our only hope for fairness on the job.”

Lewis, who described the group as “fun and feisty,” worked with business agent Tim Montgomery to make sure that this time, the group at Petermann got the representation they deserved.

“Organizing great people like those at KDR and Petermann is what motivates our entire staff to work hard every minute of every day,” Lewis said. “I am proud that these workers decided to take charge of their future by organizing so they can fight for respect on the job.”