(CHICAGO)  – At the national Residential Recycling Conference yesterday, the Teamsters Union protested against Republic Services Inc., bringing attention to the company’s appalling treatment of communities, workers and the environment. The conference, attended by municipal leaders and state regulators, is co-organized by Republic Services [NYSE: RSG].

The Teamsters interrupted Dan Jameson, Republic Services’ Vice President of Municipal Services and Government Affairs, during a session he was moderating titled “Truth and Consequences,” and attempted to ask him about Republic’s landfill catastrophe in Missouri. 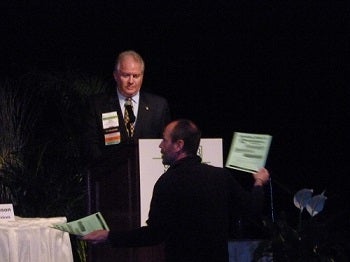 The Teamsters also distributed leaflets to hundreds of attendees describing Republic’s landfill disaster. The landfill, like many Republic landfills across the United States, is spewing noxious fumes into the air. Also, the landfill is on fire next to a nuclear waste dump site, and there have been explosions in recent weeks. The leaflet quoted one resident, a mother of three who lives near the landfill:

“The landfill Republic operates near my home has been on fire for years. The stench is disgusting and the EPA says radioactive nuclear waste at the site is leaching radiation into the air.

I would love to challenge anyone who claims this is a ‘green’ company. Republic doesn’t care about the health, safety and well-being of our city.”

“Sanitation workers perform the fourth-most dangerous job in the country, yet Republic Services has been locking out its workers, shorting their paychecks, and trying to cut their retirement,” Morales said. “This has led to trash service disruptions in numerous U.S. cities during the past year. I’d recommend cities follow Seattle’s lead, where the city has strong contract language. Seattle’s waste and recycling vendors pay steep fines for service disruptions.”

Last year in Evansville, Ind., Republic intentionally left the city without reliable service when it locked out its workers without pay for six weeks in an attempt to bully them. Out-of-town replacement drivers damaged people’s homes, vehicles and even power lines during the lockout. Sympathy picket lines and picket line extensions caused work stoppages in five other U.S. cities.

Also last year, Republic refused to honor a binding contract with its sanitation workers in Mobile, Ala. The workers were forced to strike to protest the company’s illegal behavior, and took their picket lines to six other cities across the country. Fellow Republic workers refused to cross picket lines in Buffalo, N.Y.; Columbus, Ohio; and Seattle, Bellevue, Kent and Lynnwood, Wash.

In Memphis, Tenn., Republic is cheating its workers out of pay and staining the legacy of Martin Luther King Jr. in the city where he died fighting a righteous battle for fair treatment of sanitation workers for hard work regardless of race or union status.

“Workers in Memphis and cities across America are at a boiling point over the chronic attacks on their dignity,” Morales said. “Unfortunately, Republic Services seems indifferent to how it treats communities and sanitation workers. Municipalities should make sure they are not forced to pay the cost of company-instigated waste and recycling service disruptions.”

Republic’s total revenues were more than $8.2 billion in 2011, with profits of more than $589 million. In May 2012, the same month it locked out its workers in Evansville, the company approved a death and disability benefit for its CEO valued at more than $23 million. The largest shareholder of Republic stock is billionaire Bill Gates, who owns more than 25 percent of the company. Gates’ investment manager, Michael Larsen, sits on the Republic Services Board of Directors.