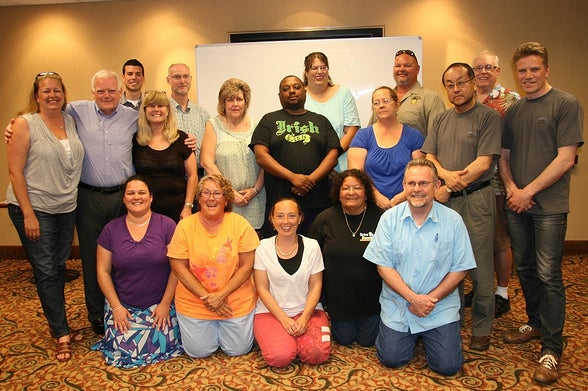 The drivers testified at a forum about workplace safety and service issues that may impact the safe transportation of area schoolchildren.

“I have seen firsthand many practices at Durham that raise serious concerns,” said Kim McLaughlin, a 25-year driver who works at Durham. “Many of our buses regularly have fluid leaks, tires that need to be replaced and emergency equipment that doesn’t work.”

“I am concerned about the safety of our school buses and the transportation services we deliver at Durham. I am also concerned that even when drivers raise safety concerns, we are often ignored, and in some cases, yelled at for raising our concerns,” said Diane Bence, a driver at Durham’s Navarre location. “I love my kids and I want to make sure they are safe.”

Bence detailed concerns over black mold on the buses, workers operating buses while sick because they cannot afford to miss a day of work and drivers not being paid for all the time they work.

About 210 school bus drivers and monitors work for Durham in Santa Rosa County. Durham is the second-largest school bus company in the United States and a subsidiary of National Express Group PLC, a United Kingdom-based multinational transportation company.

“The security of the buses must come first. I’m here to collect my impressions and share them with National Express management, to let them know that the bad treatment of workers in the U.S. has to stop, and that they need to have a good reputation in Germany and worldwide,” said Dirk Schlomer, a representative of EVG in Germany, where National Express recently won awards to operate passenger rail transport.

“In the U.K., National Express recognizes the trade unions and readily consults and enters into collective bargaining with my union, Unite. If it’s good enough for the U.K., then why not for the U.S. drivers?” said Bobby Morton, national officer for transport with Unite the Union.

The delegation traveled to Santa Rosa County from Charleston, S.C., where on Tuesday they heard testimony from Durham drivers on problematic safety, service and work conditions there.

School bus drivers with Durham in Santa Rosa County voted overwhelmingly in February to join Teamsters Local 991 in Mobile, Ala., overcoming an aggressive anti-union campaign by Durham management as they worked to form their union.  The company filed objections to their election, and a National Labor Relations Board hearing officer recently recommended that all of the objections be dismissed.

The National Labor Relations Board (NLRB) has issued 57 formal complaints since 2001 against Durham, which resulted in settlements. The complaints came as a result of charges by Durham workers, including disparate treatment, discipline and discharge of employees engaged in union organizing; surveillance of workers engaged in union activity; and threatening workers with reduction in benefits, working conditions and the loss of employment for supporting unionization.

Drive Up Standards is a global campaign to improve safety, service and work standards in the private school bus and transit industry. For information on the Teamsters Drive Up Standards campaign, go to http://www.driveupstandards.org.