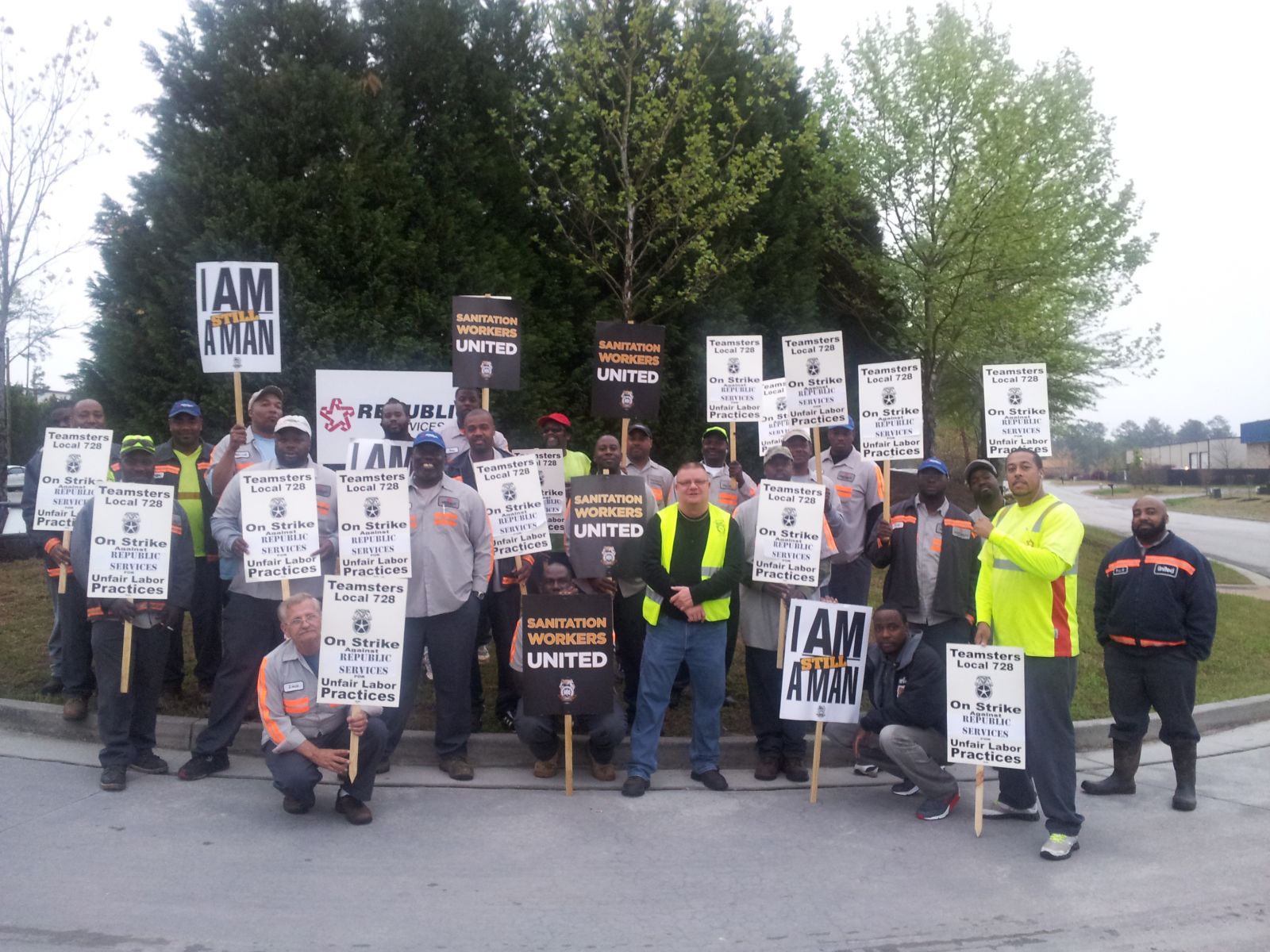 The 40 drivers, helpers and mechanics who are members of Teamsters Local Union 728 in Atlanta are exercising their legal right to strike in protest of Republic’s violations of federal labor laws that protect workers’ rights. Republic broke federal law when it fired a worker because of his support for the union. The company also broke federal law when it stopped paying drivers for time they work while returning their trucks to the yard.

“I’m on strike because this giant waste corporation thinks it can get away with breaking the law to intimidate us and bully us, and cheat us out of pay for time that we worked. We organized and chose to be represented by the Teamsters in 2011, but the company refuses to bargain in good faith with us for a fair contract,” said Renard Henley, a residential driver in McDonough. “I’ve been talking with other workers on the Facebook page, and we have been following the Youngstown strike closely. We have all had enough of the company’s greed.” 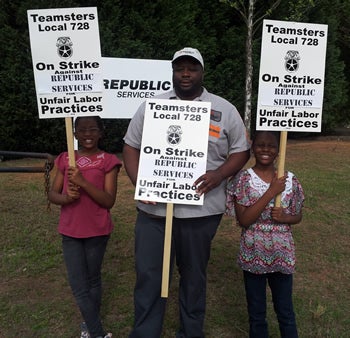 “Republic Services is one of the most abusive corporations I’ve encountered,” said Randy Brown, President of Teamsters Local Union 728. “Dr. Martin Luther King Jr. was born here in Atlanta, but Republic will not give its workers in McDonough Martin Luther King Day as a paid holiday. This group of workers is 90 percent African-American and have seen no wage increases for four years despite Republic making more than a half a billion dollars in profit each year.”

In Ohio, 23 workers at Republic’s Carbon Limestone Landfill outside Youngstown have been on strike since March 27. They are members of Teamsters Local Union 377. This morning they extended picket lines to Republic facilities in five Ohio cities, and close to 600 Teamster members are refusing to cross the picket lines. 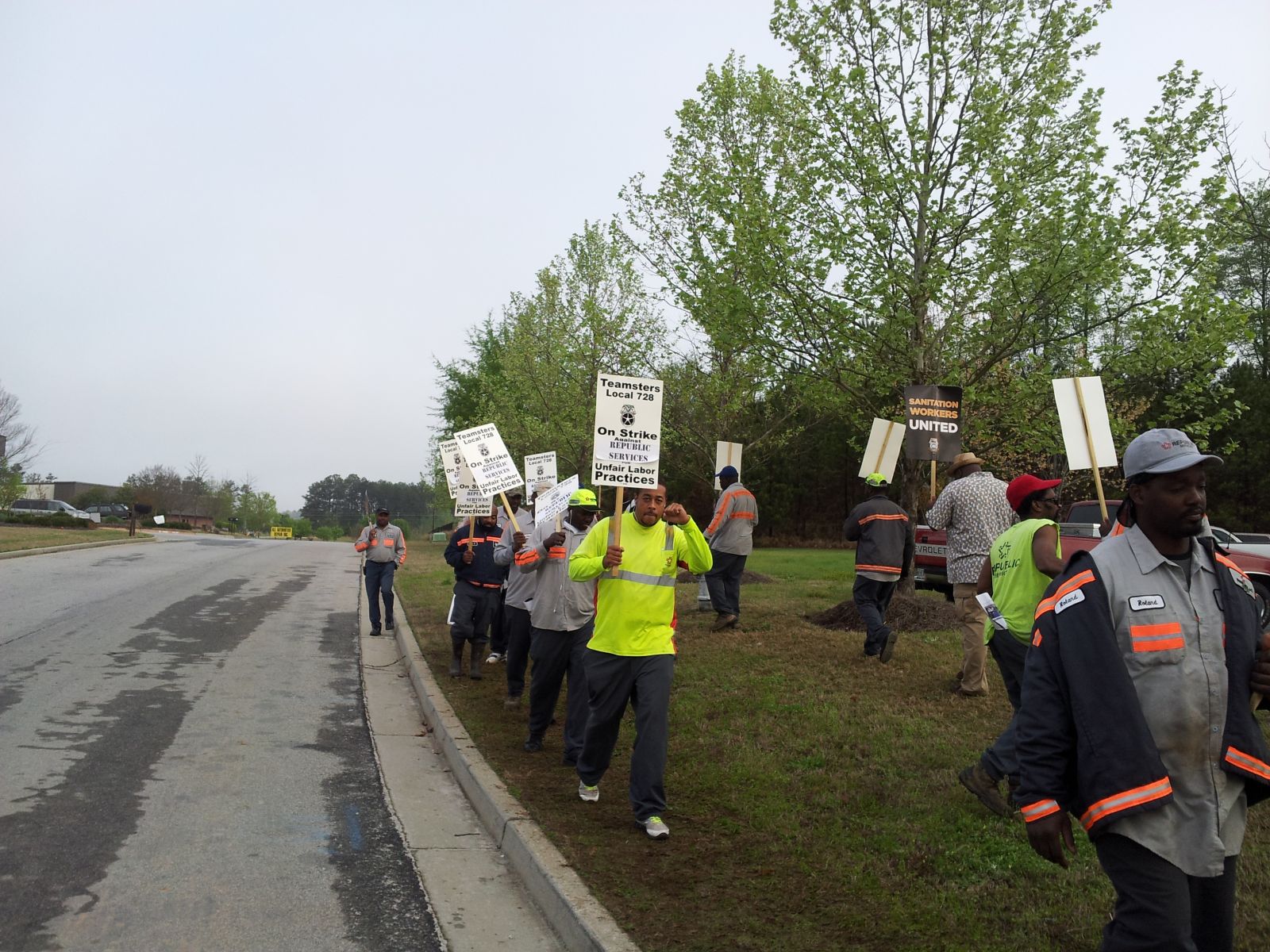 Over the past year, Republic/Allied Waste has forced multiple lockouts and strikes, disrupting trash collection for hundreds of thousands of people across the United States and putting communities at risk. Republic earned profits of more than $572 million in 2012. The company’s primary shareholder is Microsoft chairman Bill Gates, the second  richest person in the world.

“Bill Gates is worth $66 billion. Republic earns more than $8 billion each year. So why are they cheating workers out of money they need to feed their families? Why does this corporation lock workers out of their jobs when they want to keep their retirement benefits? I don’t know how the people at this company sleep at night,” said Robert Morales, Director of the Teamsters Solid Waste, Recycling and Related Industries Division.

“In January many of us had to take the day off unpaid to march in the annual Martin Luther King Jr. day march in Atlanta,” Henley said. “We marched alongside our colleagues who work for Republic in Memphis, and it became clear very quickly that we all needed to come together as one to be able to stand up to this corporation. Republic’s bullying will end because we, the workers, will stand up as long as it takes to stop it.”

Republic/Allied Waste’s total revenues were more than $8.1 billion in 2012. Bill Gates is the primary shareholder of Republic stock. Gates owns approximately $2.4 billion worth of stock, or 25 percent of the total worth of the company. Michael Larsen, Gates’ investment manager, sits on Republic’s board of directors.