(WASHINGTON, D.C.) – American Airlines mechanics and related workers filed for an election today with the National Mediation Board (NMB) as part of a months-long effort to become Teamsters. The petition for an NMB election comes on the heels of a similar move by US Airways mechanics seeking Teamster representation who filed for their election earlier this month. 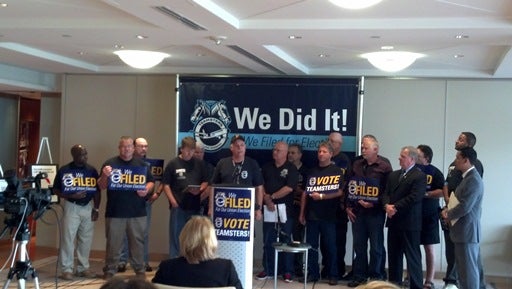 “Workers around the country have been under attack for years and we as American Airlines mechanics are no exception,” said Bill Wheeler, a 26-year mechanic who traveled to Washington, DC for a press conference announcing the filing. “After enduring 20 years of concessions, outsourced jobs, bankruptcy, frozen pensions and an overall lack of respect, we are coming together to bring in the bargaining power of the Teamsters Union, which has the strongest record representing mechanics in our industry.”

“From day one, this campaign has been about our craft standing up and fighting back against the rampant outsourcing and other abuses we’ve seen over the years,” said Jim Witt, a 24-year AA mechanic from Los Angeles. “We’ve had enough and today with the Teamsters we are drawing a line in the sand. The Teamsters have the experience and power to stand up to management and restore the dignity of our profession.”

“Today’s election filing is a tremendous milestone for American Airlines mechanics who have built a powerful mechanic-led campaign for Teamster representation,” said Teamsters General President James P. Hoffa. “Their determination despite the tough odds has led to this historic achievement and will lead to a strong future for mechanics and related at AA.”

“For too long mechanics in the airline industry have seen jobs outsourced and standards plummet, comprising maintenance quality, workers’ livelihoods and the safety of the flying public,” said Capt. David Bourne, Director of the Teamsters Airline Division. “This impressive campaign for Teamster representation at America Airlines represents a huge step toward reversing this trend. The Teamsters Airline Division is proud to work with these mechanics in this historic effort.”

American Airlines has been in bankruptcy since 2011, resulting in the downsizing of aircraft maintenance stations and furloughs targeting AA mechanics. Meanwhile, a bankruptcy judge recently approved AA’s merger deal with US Airway, which will create the world’s largest airline.

Founded in 1903, the International Brotherhood of Teamsters represents more than 1.4 million hardworking men and women in the United States, Canada and Puerto Rico. Visit www.teamster.org for more information. Follow us on Twitter @Teamsters and “like” us on Facebook at www.facebook.com/teamsters.