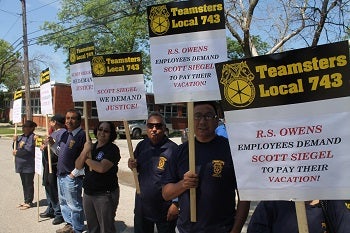 The awards manufacturer owes approximately 48 workers as much as four and a half weeks of vacation benefits they accrued in 2012, its final year of operation on Chicago’s northwest side. R.S. Owens merged in December with St. Regis Crystal, a Canadian firm, which rehired more than 30 of the company’s long-term employees. Many who kept their jobs producing the Academy Award—and particularly those who didn’t—were shocked to find the vacation benefits promised by their former boss were lost in the transition.

“Most of these employees proudly worked for R.S. Owens for more than 25 years,” said Emma Moreno, Vice President of Teamsters Local 743, which represents the workers. “While the union applauds St. Regis for rehiring much of the talented workforce, the company cannot cheat its workers or deny them their rights. R.S. Owens must honor the benefits its workers have earned.”

In a show of solidarity with current and former members, Local 743 and Teamster affiliates across the Chicago metropolitan area rallied on June 7 outside the city’s operating facilities retained by St. Regis. More than 50 Teamsters and supporters, including a dozen workers not rehired by St. Regis, joined Local 743 for the job action. For more than two hours, union members urged former R.S. Owens President Scott Siegel to make workers whole for all benefits earned in 2012.

Local 743 is expected to enter negotiations with St. Regis beginning June 12 to bargain a new contract for the manufacturing employees.

Teamsters Local 743 is an affiliate of Teamsters Joint Council 25, which represents more than 125,000 hardworking men and women throughout Illinois and northwest Indiana.