“The company wasn’t changing things for the better, so we found a way to change it ourselves and to progress in our lives,” said Kizza Doby, a six-year driver with Keolis. “We don’t have sick days. Our hours are being cut, which doesn’t allow us to do everything it takes to provide good service. We chose the Teamsters for our future.”

The 94 workers transport and assist special needs adults in southern California. The workers faced resistance from the company in their efforts to form a union, which only made them stronger. 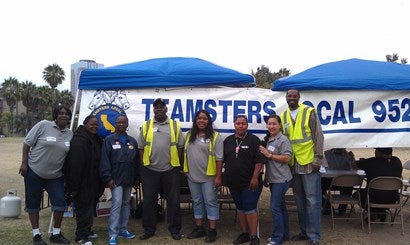 “This is one of the strongest groups I’ve worked with. They showed solidarity, that they wanted to form their union and change their lives. I’m very proud of them,” said Stan Brown, an organizer with Local 952.

Brown noted that the starting pay is $8 an hour, with a number of workers reporting that their paychecks are shorted from week to week. The low pay makes the costly medical plan unaffordable for most.

“I know one driver who pays $645 a month for medical for himself and his wife,” Brown said.

“This is a global company, based in France, that needs to improve wages, benefits and standards, and not undermine union employers. Keolis workers have proven to be an inspiration to all of us,” said Patrick D. Kelly, Secretary-Treasurer of Local 952.

Drive Up Standards is a global campaign to improve safety, service and work standards in the private school bus and transit industry. Since the campaign began in 2006, more than 36,100 drivers, monitors, aides, attendants and mechanics have become Teamsters.

For more information on the Teamsters’ Drive Up Standards campaign, go to www.driveupstandards.org.