Teamster member Rick Smith, host of the radio program The Rick Smith Show, just returned from a trip to more than 20 cities and towns across the country. Along the way, he stopped in at some Teamster local unions and Joint Councils to hear about the history of organized labor, the struggles and triumphs of past fights and the current challenges facing working men and women. 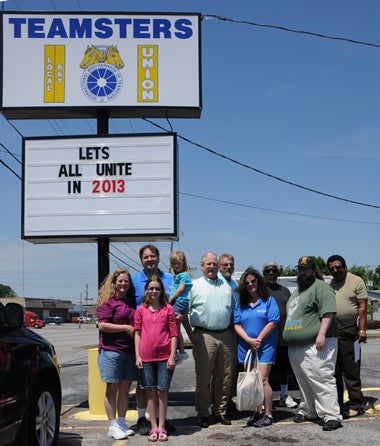 “It was a fantastic trip and a moving experience for me,” Smith said. “Before embarking on the trip I thought I knew about America’s labor history, but now I’ve heard the most incredible stories from people who have actually lived it.

“At each new city we were fortunate to be introduced to some amazing labor union leaders, retirees and activists. The trip gave us all a new perspective on working life in America—where it has come from, how present-day challenges are affecting our jobs and how we are adapting to the changes,” Smith said.

Smith interviewed a relatively new Teamster member, Richard Jones, a library assistant at UCLA and member of Local 2010. He and his 14,000 clerical and administrative co-workers at the University of California joined the union in 2010. Since then the union has been busy training stewards and working toward better communication with the members.

“My family has been involved in the union movement for more than 100 years,” Jones said. “I am glad to be part of the Teamsters. This carries on a tradition in my family: My grandfather was a member of the Brotherhood of Sleeping Car Porters, and his son, my father, was a member of the Letter Carriers.

“It’s been a trend recently in our country for public employees such as myself to become the backbone of some of the large unions,” Jones said. “I voted for Teamster representation because of their political power and the backing of the 1.4 million members in the U.S. and Canada.”

While in St. Louis, Smith interviewed Roy Gillespie of Joint Council 13. Gillespie is the Joint Council’s representative on the Human Rights Commission and he has personally responded to numerous families in need after the devastation of a natural disaster. This has earned him the moniker, “The Master of Disaster,” as one news source called him.

The tornadoes in Missouri and Oklahoma and hurricane in New Jersey and New York are spots where Gillespie called upon Teamster locals to help out. “We were never refused. Any help that a local union and its members could provide was always gladly given,” Gillespie said. “We worked with the Red Cross and FEMA coordinating the type of union assistance that is needed after a disaster strikes. Whether it’s building stairs or transporting food or furniture, we have met the need.

“The Teamsters Human Rights Commission is a network of people who are community-minded,” Gillespie said. “It’s what being part of a union is all about.”

During the trip, Smith’s interviews included perspectives on pending or passed legislation and its effect on working families.

Melanie Orman, political coordinator for Little Rock’s Local 878, talked about how since right to work already passed in the state, they have an uphill battle. “Right to work hinders our ability to organize…We’ve also had some issues with freight industry trying to define truck drivers are independent contractors. One way we have been effective is to work with other unions in the state and bring rank-and-file members in to the capital to testify.”

In California, the concern about unsafe Mexican trucks crossing the border has sparked demonstrations by local Teamsters. “Our union recognizes that driving a truck is a professional skill,” said Ed Rendon, Director of Public Affairs and Education for Joint Council 42 in Covina, Calif. “We are concerned not only with the wages and benefits of our members, but also their safety on the road.”

Part of the tour took Smith’s show to states which have been hit particularly hard by legislative setbacks. Among those is Michigan where the recent passage of right-to-work laws was a big blow for the workers. The passage of the law in Michigan had long been a goal of CEOs and billionaires who want more of workers’ income for themselves. As Smith discussed with Greg Nowak, President of Detroit’s Joint Council 43, these laws weaken workers’ rights, lower wages and make workplaces more dangerous.

“We will rebound,” Nowak said. “Michigan and Detroit are resilient. Our main challenge will be to educate voters about how wrong right-to-work laws are. Lower wages, erosion of the middle class—that is what right to work is about.”

Back home in Pennsylvania, Smith summed up the trip: “I think it’s important today to realize how past generations fought for the working conditions we have today. These are the battles my grandparents fought. The People’s Tour for America enabled our program to hear from a wide range of union members and activists. That’s what truly made the trip worthwhile.”

Rick’s daily labor radio show is available on www.Stitcher.com and via his website, www.ricksmithshow.com.