A proposed trade agreement receiving little notice from the public could have a dramatic effect on the nation’s workers unless Congress steps in to ensure that its myriad provisions protect U.S. employees by putting in place fair trade rules.

The U.S. and 11 other nations on four continents are currently in the midst of negotiating the Trans-Pacific Partnership (TPP). The wide-ranging pact could set new rules on everything from workers’ rights to manufacturing and food safety, all while pushing middle-class Americans out of work. A vote on the deal could come by the end of this year.

As it stands, however, Capitol Hill doesn’t know what it will be voting on. The involved nations have held secret talks across the globe over the past three years where only the involved representatives have access to the full set of draft proposals. This has led to much frustration from the Teamsters and other parties.

The non-transparent nature of the negotiations has spurred some lawmakers to take action. Thirty-six freshmen House Democrats, for instance, recently signed on to a letter calling on increased transparency from the Obama administration with regards to the TPP. They said the nation has to make sure it doesn’t repeat past mistakes that allowed U.S. jobs to be shipped overseas so corporations could pocket bigger profits. 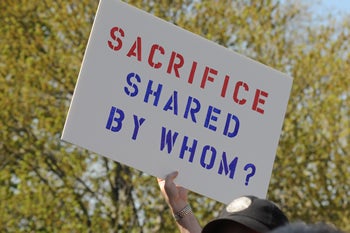 “Too often, our country’s trade agreements have been a bad deal for American industries and for the American worker,” a leader behind the crafting of the letter, Rep. Mark Pocan (D-Wis.), said. “As a small business owner, I’ve seen the number of Made in America products available to me dwindle sharply in the past decade because of the unintended consequences of so-called ‘free’ trade agreements. Congress cannot repeat the mistakes of the past by standing by and blindly agreeing to new trade agreements without proper regulation.”

The letter noted that the outsourcing of jobs was a major concern during the 2012 election and that polls shows Americans don’t want to see jobs done by U.S. workers sent overseas because of unfair trade agreements. “When jobs and production factories are offshored, American wages are lost, American-made products decline, and our international interests are compromised,” the letter said.

Those lawmakers were not alone in raising objections. Sen. Elizabeth Warren (D-Mass.) said it does not make sense for the Obama administration not to make at least an edited version of the composite, bracketed text of the TPP available considering the former Bush administration did so as part of the Free Trade Area of the Americas negotiation.

And Sen. Ben Cardin (D-Md.) took issue with the labor and human rights record of Vietnam, one of the nations participating in the TPP talks, and said such issues need to be addressed.

“We have the opportunity to make those advancements as we have their attention at the bargaining table,” the lawmaker said during a recent Senate Foreign Relations Committee hearing.

The Teamsters have also been outspoken in their concerns with the TPP. Those affiliated with the union, for instance, have spoken to state lawmakers and at antitrade pact rallies about how the deal could hurt working- and middle-class families.

Mark McPherson, an organizer with Joint Council 37 in Portland, Ore., warned members of the Oregon House Committee on Agriculture and National Resources in May about the potential deal. But for many of the legislators, it was their first time hearing about the TPP. That’s a problem, he said.

“On the national level, they want to create the image there is some transparency. But really there is none,” McPherson said. “Here we have people who could be impacted but don’t even know about it. Clearly, it has been done in secret.”

He noted, for example, that Oregon’s dairy industry—which employs about 800 Teamsters at 10 different locations around the state—could be hit especially hard if the TPP moves forward. It is expected that New Zealand’s state-owned dairy sector would take a significant bite out of local butter and cheese producers.

Although it is thousands of miles away, New Zealand could ship dry dairy products such as whey, which is used to make both products.

During the hearing, McPherson said some Republican lawmakers tried to argue the U.S. can’t remain competitive with other nations due to workplace regulation.

But he piped up to say that America should not be fighting this battle on other countries’ turf. “We want to bring more countries up to our level, not go down to their level,” he said.

Others have taken to social media to speak out against the TPP. Michael Gilliam, a locomotive engineer with BLET Division 601 in Newark, N.J., said there is too much at risk to remain quiet on the issue.

“Even in this so-called global economy America should put Americans’ welfare ahead of profits and rein in the corporate chiefs who are trying to sell us down the river for higher year-over-year returns,” he said. “Made in America needs to be what our government works to achieve.”

So what is really so bad about the TPP? First, there are legitimate concerns about what it will do to the U.S. workforce.

America shed more than 5 million manufacturing jobs in the wake of previous trade agreements in the last two decades and can’t afford to make another mistake.

Hard-working citizens are already in a difficult position given the economic downturn several years ago that hollowed out the middle class.

Such job losses would not only hurt those who lose employment, it would also devastate local tax bases. That means public schools, government services and infrastructure would be cut, while unemployment would soar in the construction sector.

In an effort to prevent this, the Teamsters back the current U.S. negotiating position when it comes to labor rights provisions in the agreement. That means standing up for core labor rights that are enforceable by trade sanctions and preventing unsafe sweatshop operations like the one in Bangladesh that led to the death of more than 1,100 garment workers in April.

The union also believes there should be more transparency in the process. It has asked the Office of the U.S. Trade Representative to publish all negotiating texts, consult with relevant congressional committees and stakeholders, and provide a thorough public assessment on how the TPP would affect the U.S. dairy industry.

In addition, the Teamsters want to make sure that those on Capitol Hill provide trade negotiators with objectives that ensure that the nation’s goals are met when it comes to food safety, food sovereignty, conservation, elimination of currency manipulation and worker rights. And that any proposed TPP deal gets a full vetting before Congress.

As for the dairy sector, the Teamsters, who represent 30,000 such U.S. workers and nearly 10,000 in Canada, oppose further dairy market access contained in the TPP. The union has been joined by family farm groups in the U.S., Canada and Japan in calling for such a move.

Let’s be clear, no one is against trade, only unfair trade. The Teamsters are part of a growing coalition of labor, elected officials and public interest groups who are tired of letting big corporations ship our jobs overseas and dump wages and benefits overboard along the way. We’ve seen enough lost jobs, shuttered plants and hollowed-out communities in this country.

Americans oppose unfair trade. They see what the North American Free Trade Agreement and other such deals have done and want to avoid putting U.S. workers at a disadvantage and consumers here at risk.

The Teamsters want to make sure that when the U.S. negotiates a trade agreement, every provision benefits working families, not just big corporations. Members can play a role in that by contacting their congressional representatives and letting them know that details about the TPP should be made available and debated publicly.

Congress, under the U.S. Constitution, has an official role to play when it comes to overseeing trade agreements. The union strongly believes it shouldn’t punt that away, even if the Obama administration thinks otherwise. The TPP needs to come out of the shadows and into the public square where working Americans can have a say.

Maybe you’ve heard of the Trans-Pacific Partnership (TPP) and the harm it could bring both to U.S. workers and consumers. But do you know about the Trans-Atlantic Free Trade Agreement (TAFTA)?

Just in its infancy, TAFTA threatens to build on the North American Free Trade Agreement (NAFTA) and other such deals that have caused a reduction in food safety standards and environmental rules here and abroad. And already, U.S. and European corporations are stepping up their lobbying efforts to erase critical safeguards.

Its scope is far reaching. The Institute for Agriculture and Trade Policy (IATP) recently made available draft European Union documents it received that outlined the EU’s initial regulatory goals. They touched upon such things as the automotive sector, chemicals, pharmaceuticals, sanitary issues and competition policy. But it also proposed a chapter on trade and sustainable development, as well raw materials trade. And it has big plans for cross-cutting disciplines on regulatory issues.

According to IATP, the EU wrote that TAFTA “offers a unique chance to give new momentum to the development and implementation of international regulations and standards (multilateral or otherwise plurilateral).

This should reduce the risk of countries resorting to unilateral and purely national solutions, leading to regulatory segmentation that could have an adverse effect on international trade and development.”

While having some uniform rules might make sense, those rules must ensure workplace safety and protect the environment, public health and the food system. That hasn’t been the case with previous trade pacts. Such agreements also must allow advances in standards to be put forward as the knowledge of different sectors evolves.

Put TAFTA and the TPP together, and they will regulate the vast majority of global trade. That’s reason enough to be wary.