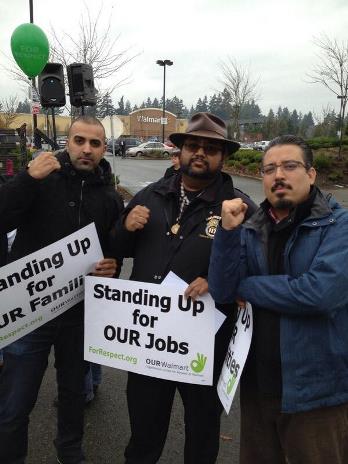 Teamsters are out front supporting Walmart worker protests in the run-up to the nationwide strike planned for Friday, Nov. 29, or Black Friday. Walmart workers want respect, a living wage and the right to form a union.

Yesterday, our brothers from Teamsters Local 117 in Seattle protested Walmart's union-busting and poverty wages. They were supporting Walmart workers who went out on a one-day strike – the latest in the lead-up to strikes and protests planned for Black Friday. Last week, one of our Teamster brothers was arrested in Los Angeles as part of the largest peaceful civil disobedience action against Walmart. He was one of 54 people arrested for sitting down in the street outside LA’s Chinatown Walmart as several dozen Walmart workers walked off the job.

Walmart pays the vast majority of its workers less than $25,000 a year, which in many places isn’t enough to support a family. The average Walmart worker receives $1,000 in government help, and Walmart employees are the biggest group of Medicaid and food stamp recipients in the country. And when a Walmart store moves into town, everyone else’s wages go down.

Teamsters are encouraged to join in actions supporting Walmart workers on Black Friday. Tell Walmart managers and executives that you stand with the 60 workers Walmart illegally retaliated against for standing up to management during its shareholder meeting. Tell them you stand for every worker at the country’s largest retailer and all along its supply chain.

Enter your ZIP code below, and find a Walmart store near you. You can RSVP to join an action or adopt-a-Walmart and an action or rally at that store.