(WASHINGTON) – Today, United Airlines (UAL) professional aviation mechanics represented by the Teamsters Union escalated their actions to pressure the company to live up to its promises by hand-billing UAL customers inside and outside 12 major airports around the country. UAL mechanics are informing the public that they may be forced to strike if the company refuses to keep its promise to provide a fair agreement that adequately compensates and protects these workers after years of concessions. 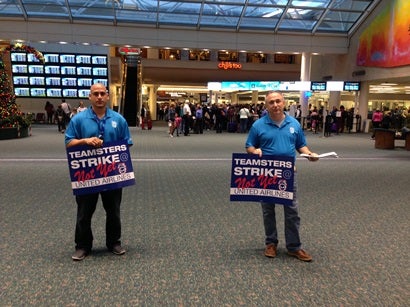 On Monday, hundreds of Teamsters participated in informational pickets at 10 U.S. airports. Photos and videos from Monday’s informational pickets and today’s hand-billing can be viewed online here. The Association of Flight Attendants-CWA (AFA) announced that they stand “shoulder-to-shoulder in solidarity with our sisters and brothers at the Teamsters” to “demonstrate to the company it’s time to move forward together” and joined the Teamsters on the picket line. Read AFA press release here.

The second quarter of 2013 saw UAL earn its highest revenue in history. After a year of stalling, UAL executives broke off contract negotiations without agreeing to the pensions they had promised, and declared that 3,500 mechanics will be forced to pay an additional $300-$500 each month for their health care. The last proposal made by the company would actually have thousands of mechanics making less than they do today.

“Our job is to keep passengers safe and we are proud of what we do. But we are being asked to accept a contract that does not value the contribution we make every day to United and its passengers,” said John Laurin, a 24-year UAL mechanic at San Francisco International Airport and member of Teamsters Local Union 856. “We want United to live up to its promise and give us a fair contract that reinstates our pensions.”

Teamsters hand-billed at the following airports on Wednesday, Nov. 27:

“United promised us a year ago that they would enter into fast-track negotiations to reach an industry leading contract – one that we could all be proud of ,” said Mike Moats, a UAL mechanic at Cleveland Hopkins International Airport and member of Teamsters Local Union 964. “After stalling and making excuse after excuse, the Company came back with a proposal that would have resulted in pay cuts for thousands of our members.”

The Teamsters Airline Division represents about 80,000 workers in all segments of commercial aviation, including mechanics, pilots, and flight attendants. The International Brotherhood of Teamsters was founded in 1903 and represents more than 1.4 million hardworking men and women in the United States, Canada and Puerto Rico. Visit www.teamster.org or www.teamsterair.org for more information. Follow us on Twitter @Teamsters and “like” us on Facebook at www.facebook.com/teamsters.