Teamsters General President Jim Hoffa blasted the secret negotiations over the Trans-Pacific Partnership (TPP) at a Capitol Hill press conference Wednesday and warned of further hemorrhaging of U.S. jobs if the trade deal is approved. 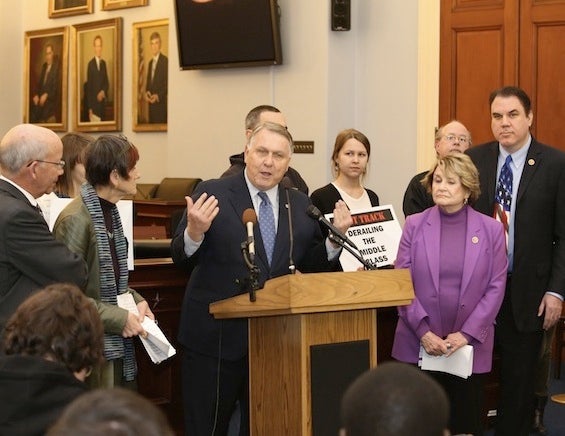 “We’re all for fair trade, but this isn’t really about trade,” said Hoffa, who joined Reps. Rosa DeLauro, D-Conn., and Louise Slaughter, D-N.Y., workers and fair trade advocates in speaking out against TPP. “It’s a corporate power grab that will harm workers all over the world.”
He called on negotiators to release the full negotiating text to the public, members of Congress and the media. The latest round of negotiations among representatives from 12 countries stalled early Tuesday in Singapore with no deal reached.
“Negotiators say minor ‘progress’ was made during the latest TPP secret negotiations, but it’s really just Groundhog Day,” Hoffa said. “We’ve heard these promises before. This deal won’t create more Americans jobs, stop currency manipulation or keep our food and environment safe.”
Jerry Reeves, a worker at Lehigh Valley Dairies in Landsdale, Pa., and a 20-year member of Teamsters Local 463, also spoke out against TPP, saying an agreement would hurt the nation’s dairy industry because a New Zealand conglomerate would be granted special access to the U.S. for its cheap dairy exports.
“If this deal passes, it could threaten the livelihoods of 40,000 Teamster dairy workers,” Reeves said.
Founded in 1903, the International Brotherhood of Teamsters represents 1.4 million hardworking men and women throughout the United States, Canada and Puerto Rico. Visit www.teamster.org for more information. Follow us on Twitter @Teamsters and “like” us on Facebook at www.facebook.com/teamsters.
« Previous Next »