(WASHINGTON) – Hundreds of D.C. cab drivers affiliated with the Teamsters Union took part in a “Fairness NOW!” caravan today throughout the city to demand an immediate stop to illegal private sedan services until a fair resolution is reached.

The services, such as UberX and Lyft, are operating illegally in the city and are stealing work from D.C. taxi drivers. Last year, the city gave the services an extension to operate until regulations were in place. The extension ended several months ago but the city failed to enact fair regulations, giving the private sedan services a big competitive edge. There’s a risk to the public as well. For example, drivers for the private sedan services are not required to undergo thorough background checks.

“Virginia ordered a cease and desist order on these companies and the District of Columbia needs to do the same,” said Irfan Jamali, a D.C. taxi driver for the past 24 years. “We are tired of seeing our livelihoods harmed because of the city’s inaction. We demand fairness now!” 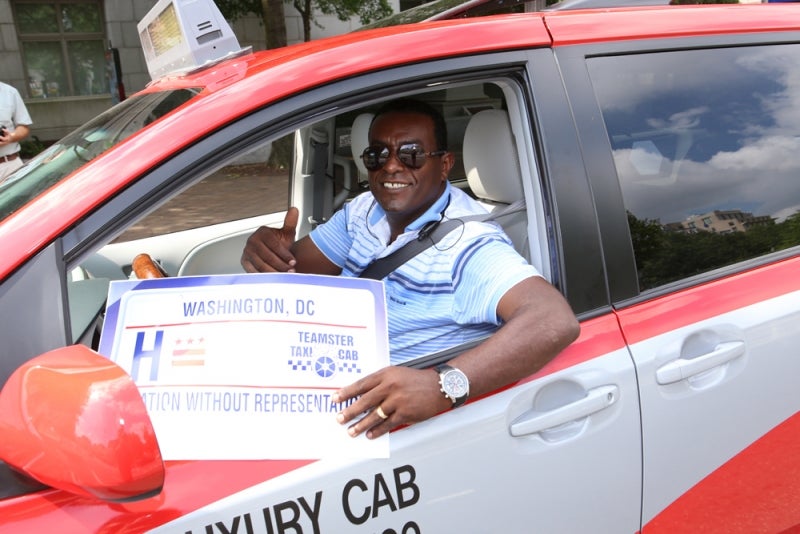 “The D.C. drivers have seen the protests across the United States and around the world, and today it is their turn to join the growing chorus calling for these services to follow the same rules and regulations that they must follow,” Buie said. “All they want is a level playing field.”

The drivers’ caravan began at East Potomac Park, proceeded to the U.S. Capitol and ended at Freedom Plaza, across from the Wilson Building (City Hall).

Founded in 1903, the International Brotherhood of Teamsters represents more than 1.4 million hardworking men and women in the United States, Canada and Puerto Rico. Visit www.teamster.org or www.dctaxidrivers.com for more information. Follow us on Twitter @Teamsters.