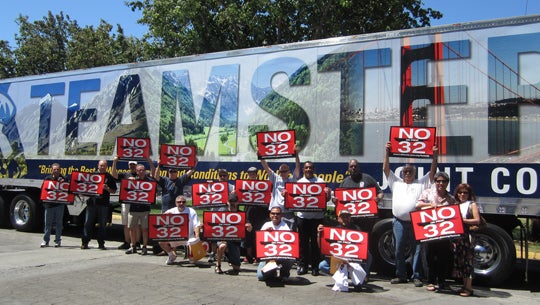 One of the most important labor battles this election season is one that many outside of California don’t know about: Proposition 32. The future of unions in California, and perhaps in the nation, is on the line.

The problem is, Prop. 32 is not what it seems. It’s called the “Stop Special Interest Money Now Act” but it’s really the “Special Exemptions and Corporate Loopholes Act.”

Bankrolled by anti-union millionaires, Prop. 32 does nothing to stem the flow of money into politics from wealthy corporations. In fact, it exempts all of them (and many more corporate interests, like real estate developers, insurance companies and Wall Street hedge funds) while silencing the voice of unions and workers.

Unions and their members can’t fight for good jobs if they don’t have a voice. If the anti-union millionaire backers of Prop. 32 succeed in tricking voters into passing this measure, it won’t stop there. This is just the first step of a one-two punch that ends with union members losing rights, like workplace health and safety, wage protections, health care, retirement security…even the right to have a union at all.

Here’s how it works: The measure seems to apply to both unions and corporations equally—but there’s a catch. The initiative is cleverly worded specifically to restrict unions and workers who give money to politics through payroll deductions, while exempting secretive Super PACs and corporate front groups.

Currently, Teamster members voluntarily fund political campaigns through weekly contributions to DRIVE, the union’s political action committee. Because the union receives those contributions through payroll deductions, Prop. 32 would ban them. This measure would take away Teamsters’ right to support DRIVE.

The people behind Prop. 32 will tell you that Sacramento is broken and this is the way to fix it. But that’s a lie. This isn’t campaign finance reform. It’s unbalanced, unfair and does nothing to address the broken system in Sacramento.

The loopholes and exemptions written into Prop. 32 mean that unions will be silenced while big business interests are still allowed to contribute directly to political candidates.

“Proposition 32 is an attempt to weaken unions. But we’re Teamsters. We stand up and fight,” said Randy Cammack, International Vice President and President of California’s Joint Council 42.

“Prop. 32 is the most vicious, anti-worker measure on the ballot I’ve ever seen,” said Rome Aloise, International Vice President and President of Joint Council 7 in San Francisco. “If this passes, we’ll have no political power to fight for our members’ rights—in Sacramento or at the bargaining table.”

Learn more and join the fight to Stop Prop 32. For more info, go to: www.stopspecialexemptions.org .