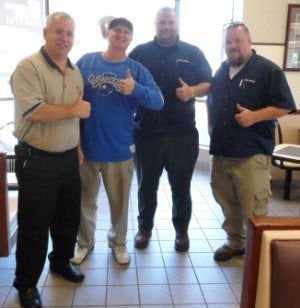 The drivers deliver medical supplies, including oxygen tanks, nebulizers, wheelchairs and hospital beds. While their jobs require a CDL, criminal background check, random drug tests and Hazmat training, the drivers say they lack the respect appropriate to their professional level of certification and training.

“There are three of us, but since they closed two facilities, we are doing the work of six drivers,” said Larry Landini, a driver who has worked at Lincare for four years. “We work 65-75 hours a week. We’re on call; we get calls at 3 a.m. and don’t get paid for it. It’s affecting our time with our families.”

Landini knew the difference the union could make, having been a Teamster in a previous job. He and his co-workers united to join Local 170 to improve their working conditions and gain respect from their employer, a billion-dollar company headquartered in Florida.

“These workers deliver important health care items and they get no respect at all,” said Paul Stuart, an organizer with the Teamsters.

“We’re happy these drivers stuck together and didn’t buy into the company’s anti-union message. We look forward to representing them to improve their working conditions,” said Mike Hogan, Secretary-Treasurer of Local 170.