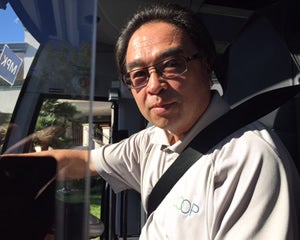 Loop Transportation employee Cliff Doi starts his day when most of us are still fast asleep. Doi is up by 4:30 a.m. so he can get out the door by 5:15 a.m. for his 35-minute commute from Oakland to Loop’s bus yard in San Carlos, Calif. His morning shift starts at 6:40 a.m. and that’s when his battle with the notoriously bad traffic around the East Bay region begins.

Doi has worked for Loop Transportation for three years – two as a dispatcher and one as a bus driver. He negotiates the heavy traffic around downtown San Francisco every morning to pick up Facebook employees, then jumps on to the 101 to deliver them to the company’s campus 30 miles south in Menlo Park. As with most urban areas, rush hour is heavy and constant around San Francisco. By the time he is done with his morning shift, Doi has spent close to 4.5 hours on the road.

Doi clocks out around 11:10 a.m. and won’t clock back in for his evening shift until 5:15 p.m.  While many people would welcome the six hours of downtime, he has little flexibility. He could spend an hour driving home in heavy traffic and another hour driving back to the yard, but he doesn’t want to risk being late. He’d like to get a second job, but Loop restricts its drivers from seeking other employment during the day.

Doi is forced to stay at the yard either sleeping in his car or in a company trailer that lacks heat, air conditioning or adequate seating and one bathroom to share with 40 other drivers. There is no shade, so the drivers put blankets up in the windows to prevent cars from overheating, keeping the doors open to increase air flow.

Between regular and overtime pay, Doi is making around $43,000 with benefits. Since he is single, it’s enough to just get by, but his quality of life is so poor and he never has any downtime. In fact this past year, he lost vacation time after he couldn’t get the company to cover his shifts so he could take some time off.

“I had accumulated three weeks of vacation since Loop could never seem to cover my route when I wanted time off,” Doi said. “All the vacation time that I built up after that, I lost since Loop wouldn’t allow me to keep more than those three weeks on the books.”

By the end of his split shifts, Doi has been at the yard or in his bus for 15 hours. He will drive home around 9:30 p.m. and get ready to do it all over again the next day. 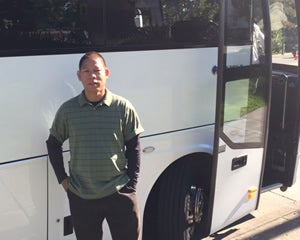 Making ends meet is a never-ending challenge for 52-year-old Jimmy Maerina. As a bus driver for Loop Transportation, he makes $18 per hour – just under $35,000 a year before overtime. Married with two children, Maerina pays $1,100 per month for company health insurance to cover his family. Add in the $2,000 mortgage on his house in San Carlos, and Maerina’s paycheck is spent before he even has a chance to earn it each month.

Maerina’s wife works as a loan officer, but even with her income, clothing and feeding his two teenage boys leaves little in the way of discretionary funds for family activities or vacations. Not that Maerina ever really gets a chance to spend quality time with his family.

“When I leave the house at 5:30 each morning for my morning route, my kids are asleep,” Maerina said. “And by the time I make it home around 9, they are getting ready to turn in for the night. I miss family dinners, helping with homework – all the little things that a family is supposed to do together.”

Maerina lives close to the Loop bus yard in San Carlos, so he doesn’t have to spend the six-hour break between shifts at the yard like most of the drivers. However, Loop will not allow any of its bus drivers to work part-time during those hours, and time that could be spent supplementing Maerina’s income is wasted.

Loop bus drivers have limited options for those six hours. Most live too far away to go home to rest and spend the day seeking shade from the hot sun in their cars at the yard. They are just scraping by, but can’t seek to supplement their income due to company policy. It’s a vicious cycle that must be addressed.

“We need a union here at Loop in San Carlos – an advocate that will stand up for our rights,” Maerina said. “We feel that is the only way Loop will listen to us and take steps to address our concerns.”